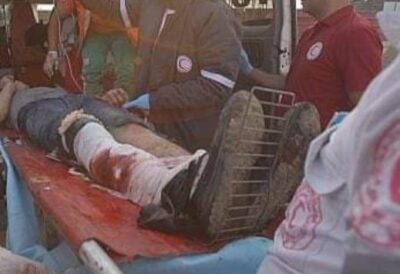 Israeli soldiers shot, on Sunday morning, a Palestinian worker near the illegal Annexation Wall near Barta’a town, southwest of the northern West Bank city of Jenin.

Eyewitnesses said the soldiers fired live rounds at Palestinian workers near the wall, wounding one of them.

They added that the soldiers shot Khaled Mer’eb Freihat with a live round in his leg, before Palestinian medics rushed his to a hospital in Jenin.

The incident is part of a series of Israeli violations and attacks targeting Palestinian workers, and farmers, on lands near the illegal Annexation Wall in Jenin, and several other parts of the occupied West Bank.