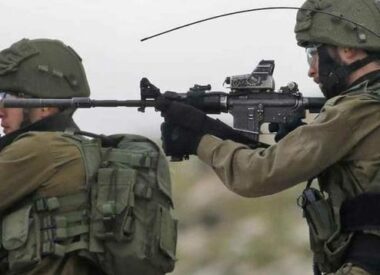 Israeli soldiers shot, on Sunday at dawn, a Palestinian worker near the illegal annexation wall, near the northern West Bank city of Qalqilia.

Local sources said the worker was among many Palestinians who were trying to cross through a breach in the illegal Annexation Wall, on their way to work.

They added that the soldiers fired many live rounds and gas bombs at the Palestinian workers, wounding one with a live bullet.

The injured Palestinian has been identified as Ibrahim Hamayel from Beita town, southwest of Nablus, in northern West Bank.

The incident is part of a series of Israeli violations and attacks targeting Palestinian workers, and farmers, on lands near the illegal Annexation Wall in Qalqilia, Jenin, and several other parts of the occupied West Bank.