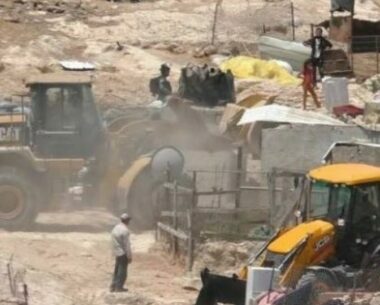 Hasan Breijiyya, the head of the Bethlehem office of the “Wall & Colonization Resistance Commission,” said the soldiers demolished three agricultural rooms owned by a Palestinian from the Mahameed family on their land.

He added that the rooms are in Dababa area in Beit Ta’mar, and are used to store agricultural equipment.

Breijiyya and said Israel is alleging the structures were built without a permit from the “Civil Administration Office,” the administrative branch of the illegal Israeli occupation.

It is worth mentioning that the army has recently escalation the demolition of rooms and sheds in Bethlehem, especially in Beit Ta’mar, in addition to the towns of al-Khader and al-Walaja.