Soldiers Shoot And Abduct A Teenage Boy Near Hebron 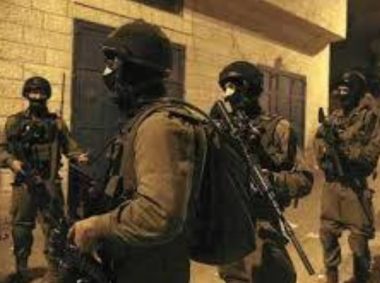 Israeli soldiers invaded, on Thursday morning, Sa’ir town, east of the southern West Bank city of Hebron, and shot a Palestinian teen with a live round, before abducting him.

Media sources in Hebron said the soldiers stormed and ransacked many homes and shops, in several neighborhoods in the town.

The soldiers also invaded Beit Einoun area, shot Ahmad Issa Shalalda, 16, with a live round in his leg, and abducted him.

The teen was shot after the soldiers attacked with live fire, rubber-coated steel bullets and gas bombs, dozens of Palestinians, who protested the invasion.

In addition, the soldiers installed roadblocks on main roads leading to villages and towns near Road #60, used by colonialist settlers and the military.

The soldiers also stopped and searched many cars and interrogated many Palestinians while inspecting their ID cards.

In related news, the soldiers abducted a young Palestinian man from the al-Khader town, south of Bethlehem, in the occupied West Bank.

It is worth mentioning that the Palestinian Prisoners’ Society (PPS) has reported that the soldiers abducted fourteen Palestinians, in various parts of the West Bank.

Besides Shalalda, four of the abducted Palestinians have been identified as Nidal Sa’id Sbeih, 25, and Abdullah Awad ‘Obeyyat, from Bethlehem, Dia’ al-Aghbar from Nablus, and Fayez Sa’id Dar Doura from Beit Liqya, southwest of Ramallah.