Israeli Soldiers Abduct A Father And His Son, And One Woman, In Hebron 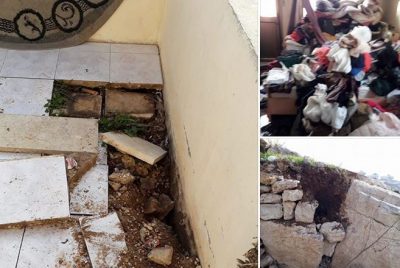 Updated: The Palestinian Prisoners’ Society (PPS) has reported that Israeli soldiers abducted, Thursday, a Palestinian father and his son, in Bani Neim town, east of the southern West Bank city of Hebron, and one woman near the Ibrahimi Mosque, in Hebron city.

The PPS said the soldiers invaded and searched many homes, and interrogated several Palestinians, before abducting the father and his son.

It is worth mentioning that the soldiers also abducted a woman, identified as Sahar Mousa Ezreiqat, 41, from Taffouh town, west of Hebron, after stopping her near the Ibrahimi Mosque, in Hebron city.

Furthermore, the soldiers invaded Sa’ir town, east of Hebron, and shot a Palestinian teen, identified as shot Ahmad Issa Shalalda, 16, with a live round, before abducting him.

Media sources in Hebron said the soldiers stormed and ransacked many homes and shops, in several neighborhoods in the town.

In related news, the soldiers abducted a young Palestinian man from the al-Khader town, south of Bethlehem, in the occupied West Bank.