Army Abducts One Palestinian Near Bethlehem 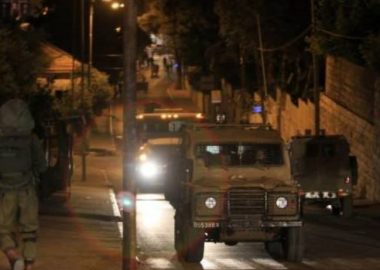 Israeli soldiers abducted, on Thursday morning, a young Palestinian man from the al-Khader town, south of Bethlehem, in the occupied West Bank.

Ahmad Salah, the coordinator of the Popular Committee against the Annexation Wall and Colonies in al-Khader, said many army jeeps invaded the town, searched homes and abducted one Palestinian, identified as Nidal Sa’id Sbeih.

He added that the soldiers caused damage to the searched homes, including a home owned by Ayman Salah, who was also interrogated by the soldiers.

In related news, the soldiers continued, for the eighth consecutive day, the extensive invasions and violent searches of homes in Jenin city, and Wad Burqin area, in northern West Bank, looking for Ahmad Jarrar, who survived an assassination attack.

During the attack, the soldiers killed his cousin, Ahmad Ismail Mohammad Jarrar, 31, who was not involved in politics.