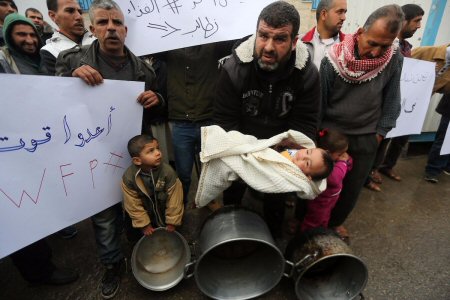 As part of the Israel-led international war on Gaza, World Food Programme (WFP) has cut food aid to 60,000 residents in Gaza living below poverty line.

To criticize this punitive measure taken by the international organisation, the poor in Gaza staged a protest in front of the head office of the UNDP.

A father of nine, including two disabled, said that he lives on the food aid offered by the different charities in Gaza.

“I have been suffering from a chronic backache for about nine years, and I cannot work,” he said, according to Days of Palestine. “Therefore, the only source of income is the food packages I receive from the different charities, including the one from the WFP.”

Jasmine abul-Assal, from the WFP office in Gaza, confirmed the reports about the food aid cuts. “Recently, we cut food aid to 60,000 poor families in Gaza,” she said.

She referred the reasons for the food aid cuts to budget deficit and lack of funds.

Last week, hundreds of Palestinian families staged protest in front of the UNDP office in Gaza against the halt of food aid that had been offered by the CHF International.

WFP and CHF International along other international charities cut their aid after Israeli calls to tightening the siege on the Gaza Strip.

This coincided with the Palestinian Authority’s increase of the punitive measures imposed on Gaza that included halt or reduction of sending medicines and necessary medical equipment to Gaza hospitals.

On Tuesday, the Palestinian Authority and Fateh President Mahmoud Abbas imposed 16 per cent tax on communication companies working in Gaza.