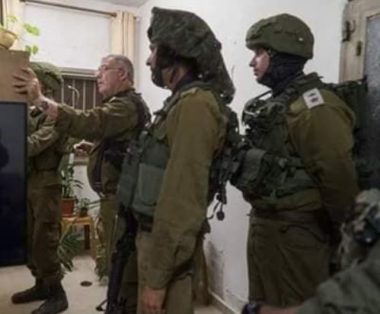 Israeli soldiers invaded, on Friday at dawn, the family home of a detainee, identified as Yazan Maghames, in Birzeit city, in the Ramallah and al-Biereh Governorate, in central West Bank, in preparation for demolishing the property.

Media sources said dozens of soldiers, and officers of the Army Corps of Engineers, invaded Birzeit, before storming the family home of Yazan Maghames, and started taking measurements of the property.

They added that the soldiers also took pictures of the inside and the outside of the home, and drilled holes in its inner walls.

It remains unknown when the army will demolish the property, but it is usually not long after taking the measurements and digging the holes in the walls where the explosives will be placed.

Israel claims that the Palestinian is one the Palestinians reportedly  involved in the fatal Ein Burin attack, which led to the death of an Israeli teen, identified as Rina Shnerb, 17, from Lod city, and the injury of her brother Dvir, 19, who suffered serious wounds, in addition to her father Eitan, 46, who was mildly injured.

The incident took place when an improvised explosive went off near them while they were hiking near a spring northwest of Ramallah.