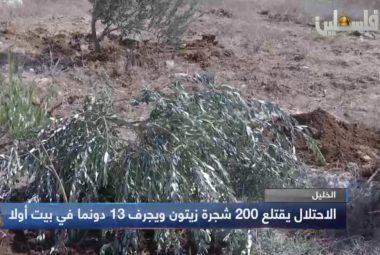 He added that the soldiers also destroyed and removed the fence which surrounded the land.

The farmer who owned the land, identified as Hijazi at-Tarshan, said the soldiers and colonialist settlers have repeatedly attacked and vandalized his lands, and several rounding farmlands, and assaulted many farmers, especially in areas near the Annexation Wall, in an attempt to confiscate the lands for the construction and expansion of the illegal colonies.

Furthermore, the soldiers bulldozed, for the second time in a raw, 13 Dunams of Palestinian agricultural lands, owned by Suleiman al-‘Adam, and also removed the fence surrounding the land of another farmer, identified as Hazem al-‘Ulama.

Shortly after the army left the lands, the Palestinians started replanting new saplings, in a message of steadfastness on their lands, and their roots.

Farida al-Atrash, said the soldiers invaded her brother’s land, who supports a family of twenty, and is having problems with his eyesight.

“When I came here and saw the lands uprooted like this, it felt like it would have been easier for us if they uprooted our souls, rather than the source of livelihood for our families,” she said.

The owner, Hizaji al-Atrash,  said the Israeli occupation is cruel, and unjust targeting the sources of livelihood of the needy families.

“I have planted the land for ten years, fed my family, and they (the soldiers) just came and destroyed our dreams.” he stated,  “This is not new, since the eighties we have been living in that room, and we have sheep, but they have since been trying to remove it from our own lands.”

Photo And Video By Palestine TV