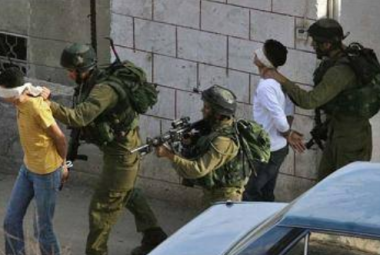 The Palestinian Prisoners’ Society (PPS) has reported that Israeli soldiers abducted, on Monday afternoon, four Palestinians, including a child, from Jenin and Hebron, in the northern and southern parts of the occupied West Bank.

The PPS office in Jenin, said the soldiers abducted Nabil Mohammad Abdul-Jabbar, 31, from Sielet ath-Thaher town, and Majed Amjad Jom’a, from the ar-Rama village, after stopping them at a military roadblock, south of Jenin.

Furthermore, the soldiers summoned a child, identified as Tha’er Younis Rajabi, 14, for interrogation in Etzion military base, north of Hebron, and abducted him shortly after he arrived there.

The soldiers also abducted Islam Abdul-Halim Houshiyya, 19, from his home in Yatta town, south of Hebron.

On Monday at dawn, the soldiers abducted at least twenty-two Palestinians, including two sisters, ages 14 and 15, from their homes in several parts of the occupied West Bank.