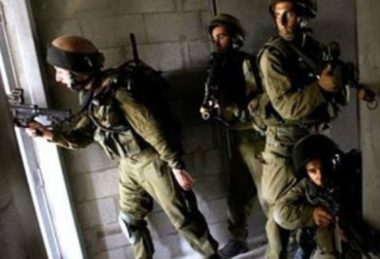 Israeli soldiers abducted, on Monday at dawn at least twenty-two Palestinians, including two sisters, ages 14 and 15, from their homes in several parts of the occupied West Bank, the Palestinian Prisoners’ Society (PPS) has reported.

The soldiers invaded many governorates in the occupied West Bank, including East Jerusalem, searched and ransacked dozens of homes, and interrogated many Palestinians while inspecting their ID cards.

In addition the soldiers summoned for interrogation in Etzion military base and security center, south of Bethlehem, two Palestinians, identified as Majdi Samer al-Badan, 13, and Habis al-‘Amour, 22, and abducted two siblings, identified as Aseel Bassem Abu Aker, 14, and her sister Nisreen, 15, from Aida refugee camp, north of the city.

It is worth mentioning that the father of the two teenage girls is a political prisoner, held by Israel.

The army also installed many roadblocks across the occupied West Bank, stopped and searched dozens of cars, and interrogated many Palestinians while inspecting their ID cards.