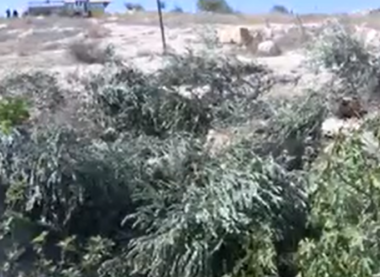 Salim Abu Jeish, a member of the Land Defense Committee in Beit Dajan, said the soldiers and personnel of the so-called “Civil Administration Office,” the administrative branch of the illegal Israeli occupation, accompanied by bulldozers, invaded a Palestinian olive orchard in the eastern part of the village.

He added that the soldiers uprooted more than 200 olive trees which were planted four years ago on about fifteen Dunams. The orchard is owned by a local Palestinian farmer, identified as Sa’ad Allan.

It is worth mentioning that the soldiers started, earlier Monday, preparing for a new segregated road leading to the illegal colonialist outpost which was installed by the colonists on stolen Palestinian lands in the ath-Thaghra area, east of the village, several months ago.

It is worth mentioning that the uprooted orchard is among 25.000 Dunams of Palestinian lands that were isolated by the army, and the residents remain denied access to them since the outpost was installed.