Stopped at the Door: Disability and the Right to Education (Part 1) 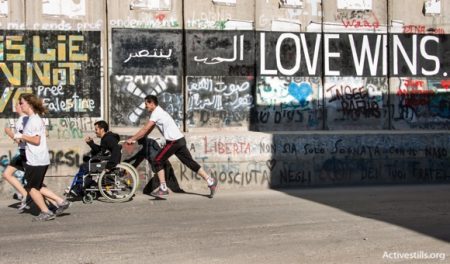 A Palestinian runner pushes a friend in a wheelchair along the Israeli separation wall, during the second annual Palestinian Marathon, April 11, 2014. (Photograph: ActiveStills / Ryan Rodrick Beiler)

Ramallah, December 16, 2016, DCIP—“I go with my son to school every day and stay with him until the end of his classes,” said Marwa Abdulmajeed, whose 8-year-old son, Wadee’a, was born with quadriplegia. Wadee’a lives with his parents and a younger sibling in the central West Bank village of Bruqin, north of Jerusalem, where he struggles to attend school.

Quadriplegia, a partial or total paralysis of all four limbs resulting from spinal cord damage, has left Wadee’a with little use of his limbs but plenty of ability to learn, as with his right. His mother has fought hard to help Wadee’a claim this right.

Initially, Bruqin Boys Primary school outright refused to admit Wadee’a, Marwa told Defense for Children International-Palestine. “The principal claimed the school was not adequately equipped to receive children with quadriplegia and that he might scare other students,” Marwa said.

After sending a slew of letters to the principal and Directorate of Education, the principal conceded and allowed Wadee’a to enroll.

Once inside the classroom, however, teachers continued to deny Wadee’a an education. “They treated him as if he did not exist,” said Marwa. “The principal and his teachers neglected him at first, and did not give him the chance to participate in the classroom.”

Faced with the school’s apathy toward her son’s education, Marwa began attending school with Wadee’a one year ago. “I would sit in the classroom with him, help him out and motivate him to participate,” Marwa told DCIP. Since then, Marwa has functioned as Wadee’a’s informal classroom aide, during school hours.

At home, Wadee’a spends much of the afternoon tackling the difficult task of training his legs to walk. Marwa gives him massages that she learned from watching his physiotherapy treatments, which the family can no longer afford.

“After I bought him a device to help him to stand up well, in June, he has begun to rely on himself to walk, but with difficulty,” said Marwa. “We also bought a wheelchair to help him go to school and other places in the village.”

The school still has much ground to cover before it can provide Wadee’a the accessible education he deserves. In the absence of mandatory supports, special educational practices or facility accommodations, school would still be out of reach for Wadee’a without his mother’s interventions. Even the school’s bathroom is inaccessible to Wadee’a, as his mother points out.

According to the Palestine Central Bureau of Statistics’ (PCBS) last disability survey in 2011, 1.5 percent of children in Palestine had a physical or at least moderate-level cognitive disability. The report noted that as of yet, there are no formal mechanisms for identifying children with minor cognitive disabilities.

The same survey found that a whopping 37.6 percent of Palestinian children with disabilities aged 15 – 17 have never attended any school. Of the group that did attend school, 22.2 percent dropped out because it was physically inaccessible to them.

Taken together, it is unsurprising that over half of all Palestinian children with disabilities were illiterate.

Children with multiple disabilities have a particularly hard road, and represent 41 percent of the total number of Palestinian children with disabilities, according to a recent United Nations Children’s Fund (UNICEF) study.

Norman Janajreh, 14, is part of this statistic, as she has both learning difficulties and a congenital skeletal growth disorder. She lives with her family in Yatma, south of Nablus, in the West Bank. Like Wadee’a, Nariman attends a school that is inaccessible to her.

After being held back in kindergarten twice, followed by a series of rejections and transfers between public and private schools, Nariman now attends Yatma Girls Secondary school. The school is about 700 meters (0.4 miles) from her house. When no private car is available, Nariman has to walk, despite her disability.

Her mother, Saeda, told DCIP that there are no accessible bathrooms at her school, forcing Nariman to use an unmodified bathroom stall without assistance. Nariman also has to climb stairs to reach her classroom, which is burdensome for her.

Despite these challenges, Nariman continues to attend school. “Her teachers are ignoring her,” said Saeda. “She is seated in the last row without any sort of attention. She still does not know how to read and write. There are no tools, activities or any curriculum for children with special needs.”

On April 2 2014, the Palestinian Authority (PA) ratified the United Nations Convention on the Rights of Persons with Disability (CRPD.) In doing so, the PA recognized the right of persons with disabilities to education and equal opportunity within an inclusive education system that provides appropriate supports.

“Children with disabilities are knocking. Palestinian schools need to not only open their doors but take steps to help these children succeed once inside the school’s walls,” said Ayed Abu Eqtaish, Accountability Program director at DCIP. “Like every other Palestinian child, children with disabilities represent our future and deserve an education.”