Tayseer Khaled Calls for Boycott of US Goods 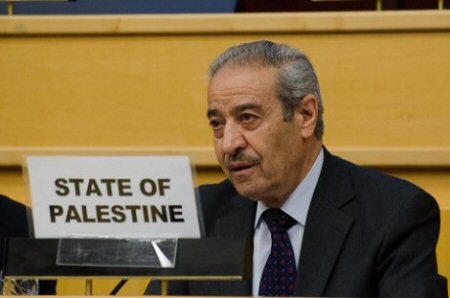 Amid controversy over the US decision to move their embassy to Jerusalem, PLO Executive Committee member, Tayseer Khaled, published a press release calling for an international campaign in the Arab, Islamic and Friendly States to boycott US goods.

The press release stated the following, according to the PNN:

“Tayseer Khaled , the PLO Executive Committee member, Head of the Palestinian Expatriate Affairs Department called on the Political Organizations, Trade Unions, Youth and Women Organizations and other Civil Society Organizations in Arab, Islamic and friendly countries to launch an international campaign to boycott American goods in support for Jerusalem, a response to the American insulting against our people, and for every unwise political step taken by the American Administration aimed to change the Legal and political Status of East Jerusalem, as an integral part of the occupied Palestinian Territories in June 1967, whether through moving the US Embassy from Tel Aviv to Jerusalem or recognize Jerusalem as the capital of the Israeli Occupation State.”

Khaled added that US President Trump’s administration acts viciously with the Arab and Islamic countries, and it neither gives attention to the Arab public opinion, nor to international law and the legitimacy resolutions related to the Palestinian – Israeli conflict.

Moreover, he said, it neglects he UN Security Council resolutions on Jerusalem, of which begins with resolution  215, issued on May 2nd, 1968, that denounces the Israeli Military Parade in Jerusalem, through resolution no. 476, issued on June 30th, 1980, which nullifies the Israeli measures to change the features of Jerusalem, then resolution no. 478 of Aug. 29th, 1980, which calls for non-recognition of the Israeli law on Jerusalem and the withdrawal of all the diplomatic missions from the city, as well as resolution no. 2334 on Dec. 23rd 2016, which affirms that the construction of settlements in the occupied Palestinian territories since June 4th, 1967, including East Jerusalem, is illegal, and demands it to ban all settlement activities. Furthermore, he stated that Israel doesn’t respect the advisory opinion of the International Court of Justice on the Apartheid Wall or its painful consequences on the occupied West Bank, the status quo in Jerusalem and its surroundings, and opposes the Israeli claims and annexation laws issued by the Knesset, and announced that East Jerusalem is, in fact, an occupied city, adding that Israel is obliged by international humanitarian law and international law, in general, to ensure free access to the holy sites under its control.

At the Palestinian level, Khaled called for uniting efforts to encounter any American step aimed at undermining the legal and political status of  Jerusalem, and to stop dealing with the US administration as a qualified mediator to achieve a political settlement to the Palestinian – Israeli conflict. He insisted the US administration be informed that Palestinians are free of such obligations or understandings with, which propose discriminatory rules of conduct to the Palestinians that are restricting their right to go to the UN international bodies and agencies to apply for their membership, as is the case with the World Health Organization (WHO), the International Labor Organization (ILO), and the Food and Agriculture Organization (FAO) and others, or to apply to the International Criminal Court (ICC) to investigate Israel’s violations of Palestinian human rights under occupation, and to investigate war crimes and settlement crimes, which Article (8) of the Rome Statute regards as a war crime.