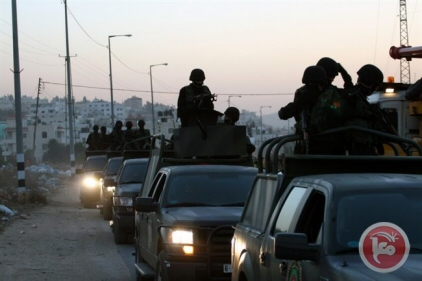 A teenaged Palestinian boy was hit by a bullet to the head on Wednesday, as Palestinian security officers clashed with masked gunmen in the village of Kafr Aqab, in the occupied West Bank district of Jerusalem.

Hamza al-Wahsh, aged 15, was in front of his family home at dawn when a stray bullet hit him in the head, according to Palestinian security sources.

Al-Wahsh was evacuated to the Ramallah Medical Center, where doctors said he was in critical condition.
Clashes broke also in the nearby Qalandia refugee camp and the neighborhood of Semiramis.

A Palestinian security official told Ma’an News Agency, at the time, that the assailants were not specifically targeting al-Shaer, but “only wanted to attack any Palestinian government vehicle.”

Several stores sustained damages during the dawn clashes, on Wednesday, which lasted a few hours on the main road between Qalandia, Kafr Aqab and Semiramis.