‘The Lobby – USA’: Lessons for the Palestine Solidarity Movement 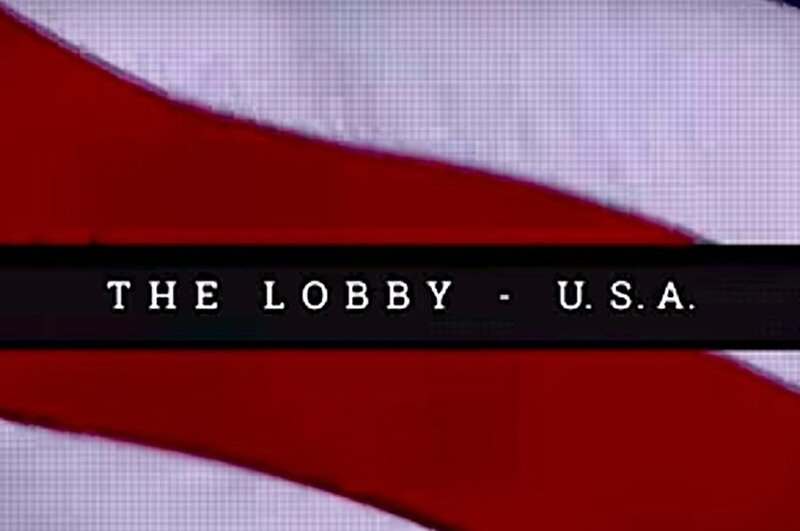 Ali Abunimah, Al-Shabaka Policy Adviser, is the author of One Country: A Bold Proposal to End the Israeli Palestinian Impasse (2006), and co-founder and director of the widely acclaimed publication The Electronic Intifada. His most recent book is The Battle for Justice in Palestine.

While Al Jazeera’s undercover investigation into Israeli influence in the United States, “The Lobby – USA,” was completed in October 2017, it never aired. Though the network’s director-general attributed the problem to outstanding legal issues, many, including journalists involved in the making of the documentary, suggested Qatari censorship of the film – likely resulting from US pressure and Qatar’s desire to curry favor with Washington. (Another Al Jazeera film on Israeli influence in the UK – “The Lobby” – aired in January 2017.)

Now, the US version is no longer under wraps: Last month, the Electronic Intifada, in tandem with France’s Orient XXI and Lebanon’s Al-Akhbar, which provided subtitles in French and Arabic, respectively, released the leaked film. (Click to access.)

The four-part documentary shows, through “Tony,” an undercover journalist, how Israel’s Ministry of Strategic Affairs works with US organizations such as the Foundation for Defense of Democracies and the Israel on Campus Coalition to advance Israel’s agenda, including its fight against the Boycott, Divestment, and Sanctions movement (BDS).

The film for the first time named an individual – Israeli-American millionaire Adam Milstein – as the founder and funder of Canary Mission, the website that smears university students and educators who support BDS and Palestinian rights. “The Lobby – USA” also revealed that the Israel on Campus Coalition works with Canary Mission, using large-scale surveillance systems that monitor social media to find material of interest, such as pro-Palestine events, to then engage in targeted harassment of individuals and groups.

“The documentary confirmed a lot of what we suspected was going on,” said Ali Abunimah, the Electronic Intifada’s co-founder and an Al-Shabaka policy adviser. “It offers very compelling evidence of the way the Israeli government is coordinating an effort to smear, sabotage, and repress people in the US who are exercising their constitutional rights – and doing so in collusion with individuals and organizations who are acting as unregistered agents of a foreign power.”

Al-Shabaka Palestinian Policy Network recently sat down with Abunimah to discuss the implications of the film and its lessons for the Palestine solidarity movement.

Targeted smearing is a main strategy of the organizations working with the Israeli government. What do we learn about this tactic in the film?

One of the more disturbing incidents involved a professor at Purdue University, Bill Mullen, who was subject to fake sexual harassment allegations from anonymous websites. While it hasn’t been possible to link the websites that accuse Mullen to a specific organization or individual, we were able to determine that they were created by the same person or persons. The tactic was identical to what those working for Israel lobby organizations described in the film, that is, smearing people via anonymous websites as a means of psychological warfare to deter them from their pro-Palestinian work. And the type of smear is strategic: Mullen is a white male professor of a certain age who would be the kind of person against whom these kinds of allegations could stick. They also targeted a young Muslim woman at Purdue, spreading lies of her drinking, partying, and sleeping with men. The willingness of these organizations to stop at nothing to silence supporters of Palestinian rights is made very clear.

How has the mainstream media responded to the leaking of “The Lobby – USA”?

The mainstream media hasn’t touched it. I find the silence to be remarkable. Regardless of the content of the film, it ought to be a story. Imagine if it was about Russian influence and pressure, and then it leaked. It would be front page news across US media. Israel lobby groups have remained largely silent, and that’s their best strategy, as they can’t spin it; their best tactic is to stay quiet and hope it goes away. But the good news is that a lot of people are watching it, and over the coming weeks and months and perhaps years millions more will see it.

“Tony” infiltrated a number of Jewish groups, so viewers don’t get as much of a sense of the role of Christian Zionism and Christian support for Israel in the US.

It would be a wrong to conclude from this film that a few Jewish groups have disproportionate power; this can drift into an unhelpful narrative or one that gives credence to conspiracy theories. However, that’s how the groups are trying to spin it; they have claimed falsely, for instance, that Al Jazeera made a film about the “Jewish lobby,” though the film never uses such language. What organizations like the Israel Project and the Israel on Campus Coalition do is fuel, feed, and try to take advantage of a narrative that is attractive to white Christian nationalists who are a strong part of President Trump’s base – and Christian Zionism is a cornerstone of this ideology. The power of the organizations exposed in the film is contingent on the power of the much bigger Christian Zionist movement in this country. The largest base of support of Israel in the US, after all, isn’t Jews, it’s Christians.

Israel and its right-wing supporters have been riding this white nationalist, anti-Semitic wave because their interest is in building up Christian Zionism and securing support for Israel at any price, even the safety of Jews. The massacre perpetrated by a white supremacist at the Tree of Life synagogue in Pittsburgh demonstrated the danger of this. Right-wing, pro-Israel organizations and the Israeli government itself went to bat to defend Trump, asserting that it’s wrong to claim that he or his followers are inciting such violence. Liberal Jewish groups rightly expressed horror at the kind of rhetoric that comes from the right and that feeds a white supremacist narrative.

How is this Machiavellian deal between Israel and its supporters and white nationalism affecting US support for Israel?

Polling data, such as YouGov’s recent poll for The Economist, is showing how US support for Israel is consolidating among white men and older people and eroding among other demographic groups, such as people of color, women, and youth. As such, the base of support for Israel is overlapping with the base of support for Trump and the right-wing agenda. When people see how strong Trump and his ilk support Israel, they recoil. Netanyahu’s strategy of making Israel a partisan issue in the US is yielding short-term gains for Israel but is eroding support in the long term.

Given your work in this sphere, and given the release of the two films, what lessons are there for the Palestine solidarity movement?

One lesson is that we need to step up and create an even more energetic and disciplined movement. People need to be aware that there is this huge organized effort to trip them up, to sabotage them, to smear them. I don’t say that to cast blame, but just to say that we’re dealing with a serious adversary and it’s important to be aware of that, and to be forward-thinking and anticipating moves.

The recent firing by CNN of political commentator Marc Lamont Hill because of his forthright support for Palestinian rights demonstrates this. His firing came after an intense smear campaign by Israel lobby groups. Hill is also facing calls to be fired from his teaching position at Temple University, though so far the university has defended his free speech rights. This episode underscores the real risks individuals in the US, especially within institutions, still face when broaching the taboo subject of Israel and crimes against the Palestinian people.

Yet at the same time you can make inroads into territory that I had thought was impenetrable. One example of this is the No Way to Treat a Child campaign, which focuses on Israeli military detention of Palestinian children. It’s a program of advocacy, lobbying, and organizing that has culminated in a bill introduced by Rep. Betty McCollum (D-MN) to ban US aid for Israeli military detention of children. Some 30 members of Congress have signed on to it. The bill just didn’t happen; it was the result of a very well-thought-out and sustained campaign. It didn’t take millions of people to do it, just a group of determined people. None of the co-sponsors of that bill lost their seats in the recent midterm elections.

What about the film makes you optimistic for the future of the solidarity movement?

The Israel lobby organizations, though they project themselves as powerful and very cloak and dagger, come off as desperate. They admit – when they think no one else is listening – that their job is difficult, that bipartisan support for Israel is crumbling. You have Jonathan Schanzer of the Foundation for Defense of Democracies saying that the anti-Semitism smear against pro-Palestinian activists “isn’t what it used to be,” and Eric Gallagher of the Israel Project noting that the foundation on which AIPAC stands is crumbling. They see the writing on the wall. Smearing individuals is a desperate tactic, and shows that these organizations don’t have answers.

Moreover, such a strategy is only potentially powerful as long as Palestine solidarity is seen as a marginal issue. Bully tactics only work as long as individuals can be singled out and targeted. As Palestine solidarity becomes commonplace, Israel lobby attacks will lose their potency. The lesson is to speak out more and to support each other more. The more we normalize criticism of Israel, the weaker their tactics become.

Disclaimer: The views expressed in this article are the authors’ and do not necessarily reflect Ma’an News Agency’s editorial policy.