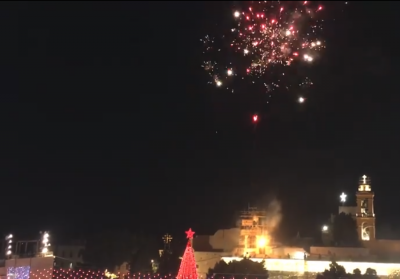 Outside the Church of the Nativity in Bethlehem, where Christians believe that Jesus was born, thousands of people gathered Saturday for the annual Christmas tree lighting celebration, ceremony, concert and fireworks.

Among the people who attended the ceremony were the Palestinian Prime Minister Rami al-Hamdallah, the Governor of Bethlehem Major General Jabrin al-Bakri, the Mayor of Bethlehem Anton Salman, the Minister of Tourism and Antiquities Rola Maaya, and the President’s Advisor for Christian Religious Affairs Ziad al-Bandak. Many other ambassadors, consuls and official and legal figures also attended.

Prime Minister Dr. Rami al-Hamdallah spoke to the attendees, saying, “The peoples and countries of the world must be aware of the terrible consequences that would come if Jerusalem is jeopardized. The Palestinian right to self-determination, with Jerusalem as the capital of our state and based on the realization of our just rights, foremost of which is the right of return and self-determination. ”

“Despite the settlement activities carried out by Israel, the Palestinian people still believe in the culture of coexistence, brotherhood and peace that our Lord Jesus Christ has brought to them, and we call on the entire world to take a united stand to end the longest occupation and oppression of history. And the realization of the rights of our people and the recognition of its state, especially as the two-state solution is in real and serious danger due to Israel’s persistence in its violations and its disregard for international law, human rights principles and signed agreements. ”

“As every year, we gather together in joy and happiness to light the Christmas tree here in Bethlehem, marking the beginning of the preparations for the glorious celebrations in Ramallah, Nazareth, Gaza and Nablus, and every place that beats in the spirit of birth. It is indeed a great honor to be with you. In this blessed event, and to convey to you all the greetings of His Excellency President Mahmoud Abbas and his wishes to all our people, Christians and Muslims, to a new year of peace, harmony and unity.”

“We are meeting today, in the midst of a bitter and difficult reality, to make ourselves a space of joy and optimism. Israel is continuing to undermine any efforts to revive the peace process. It is tightening its suffocating siege on the Gaza Strip. Israel continues to confiscate homes and installations, intimidate families with demolition orders and forced displacement, confiscate our children’s right to a normal and secure life in Gaza and the Jordan Valley and in Jerusalem and Hebron, and imprison some six thousand and three hundred Palestinian prisoners, including 300 children. This is at a time when Israel acts in violation of international law, and unleashes its army and settlers to confiscate our land and continue its violations, the most recent of which killed Mahmoud Awda in cold blood, in the town of Qusra in Nablus.

The prime minister continued, “We are continuing efforts to consecrate reconciliation. The national responsibility requires all of us to rise above all differences to move towards the serious and effective implementation of the Cairo agreement to help Gaza meet its basic needs. We call on the world that our people will remain steadfast and steadfast, believing in peace and social justice, and we will unite to defend our national project to deliver it to its inevitable destiny.”

He said, “We will not tire until we dedicate national unity and renaissance in Gaza and embody our sovereignty and independence in the state of Palestine on the borders of 1967, Jerusalem as its capital and the valleys in its heart … No occupation can change history or bury the identity of our people.”

“I congratulate all the people of the world on the occasion of Christmas and New Year’s Day, and I hope that the new year will witness more of the principles of love and peace, national unity and the end of the Israeli occupation, and an end to all discrimination, racism and extremism in the world.”

In addition to the Prime Minister’s statement, there was a concert with several singers and bands, as well as fireworks to mark the occasion.

Separately, in a ceremony in Bethlehem on the same day, Palestinians and international members of the Holy Land Christian Ecumenical Foundation celebrated the lighting of the Bethlehem Museum Christmas tree which was decorated with gas bombs and live bullets fired by the Israeli occupation army at the Palestinian people.

The tree was decorated with dozens of teargas and stun grenades which were painted as Christmas decorations, and the manger scene was placed in a suitcase surrounded by barbed wire and walls to express the suffering of the city of Bethlehem and its people because of the Israeli occupation.

Through this action, the Ecumenical Foundation said they want to show how Palestinians serve life, by turning Israeli tools of killing into objects of beauty, showing they want life, peace, justice and freedom.