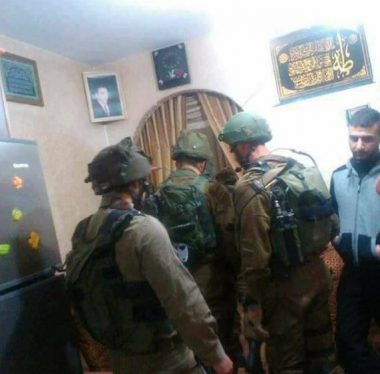 Israeli soldiers abducted, on Monday at dawn, six Palestinians, including three children, in the West Bank governorates of Bethlehem, Hebron and Jenin, after the army invaded many homes and violently searched them.

The Bethlehem office of the Palestinian Prisoners’ Society (PPS) said the soldiers abducted Issa Mohammad al-Hreimi, 17, from the city, in addition to Abdul-Rahman Amro Issa, 14, and Bilal Sbeih, 14, from the al-Khader town, south of Bethlehem.

In addition, the soldiers invaded many homes in Yatta town, south of the southern West Bank city of Hebron, and abducted Haitham Jamil Awad, 29.

The soldiers caused serious damage to Haitham’s home, after violently breaking into it and ransacking its property.

The soldiers also invaded Beit Ummar town, north of Hebron, and abducted Shadi Ibrahim Bahar, after invading his family’s home and searching it.

In Jenin, in northern West Bank, the soldiers abducted a former political prisoner, identified as Mohammad Abu an-Naseef, 40, from his home in Abu Their neighborhood.

The soldiers also invaded the home of Essam Abu Hatab, in Jenin, and violently searched it.