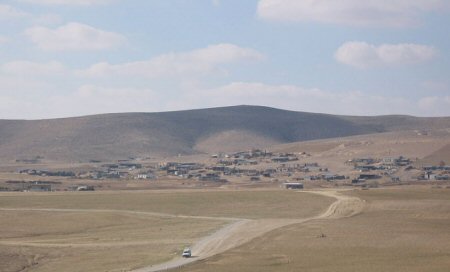 Photo: General view of one of the Unrecognized Bedouin villages of the Naqab (Negev) Desert, Wikipedia
Adalah demands Israel provide voting stations in unrecognized Naqab Bedouin villages; thousands of people with no access to public transportation forced to travel up to 50 kilometers to vote.

Eleven unrecognized Bedouin villages in Israel’s Naqab (Negev) southern desert region have no polling stations or public transportation and some of their thousands of residents will have to travel up to 50 kilometers to vote in the upcoming national elections on 9 April, 2019.

Adalah Deputy Director Attorney Sawsan Zaher detailed in her letter 11 Bedouin villages with a total population of some 40,000 residents, many of whom are required to travel dozens of kilometers from their homes – partly on foot – in order to exercise their right to vote. Many of these communities lack public transportation and many residents do not own private vehicles.

Members of the El Azazma tribe living in the village of ‘Abda, for example, must travel 50 kilometers to the government town of Segev Shalom in order to vote.

The absence of polling stations in the Bedouin villages is one of the main reasons for the low voter turnout among this population.

The villages of Rahma, ‘Abda, al-Fur’a, Wadi al-Na’am, Umm Matnan, al-Zarnuk, Bir al- Mashash, Khirbet al-Wattan, Tel Arad, al-Ghara, and Bir al-Khammam – despite being unrecognized by the state – nevertheless all have public health services and education buildings that were approved in outline plans vetted by Israeli authorities in which the Elections Committee is being asked to place ballot boxes.

Adalah stresses that harming citizens’ access to polling stations constitutes a grave and disproportionate violation of the constitutional right to vote enshrined in Israel’s Basic Law: The Knesset (Article 4). The law also stipulates that the Central Elections Committee must finance transportation for the purpose of exercising voting rights.

Prior to the previous Knesset election, the Central Elections Committee chairman rejected Adalah’s request calling to provide transportation to voters in unrecognized villages, claiming that public transportation lines situated along main highways was sufficient. However, low voter turnout figures from that election indicate that this failed to remedy the situation.

“The fact that we have to push the Israeli Elections Committee to put ballot boxes inside communities – letting every citizen exercise her or his basic constitutional right to vote – is yet another indication of Israel’s efforts to pressure Bedouin citizens to leave their homes and villages. The Central Elections Committee must allow all citizens to vote without having to embark on unreasonable journeys in order to do so.”

Below data on the concerned villages was collected by Marwan Abu Frieh, Adalah’s Naqab Office Coordinator and Field Researcher, and Amir Abu Kwider, parliamentary aide to MK Juma’a Zabarka. (Note: The number of affected citizens is estimated as the state frequently and systematically fails to collect data on Bedouin citizens of Israel, thereby leaving them absent from relevant surveys, statistical reports, and other sources of information). 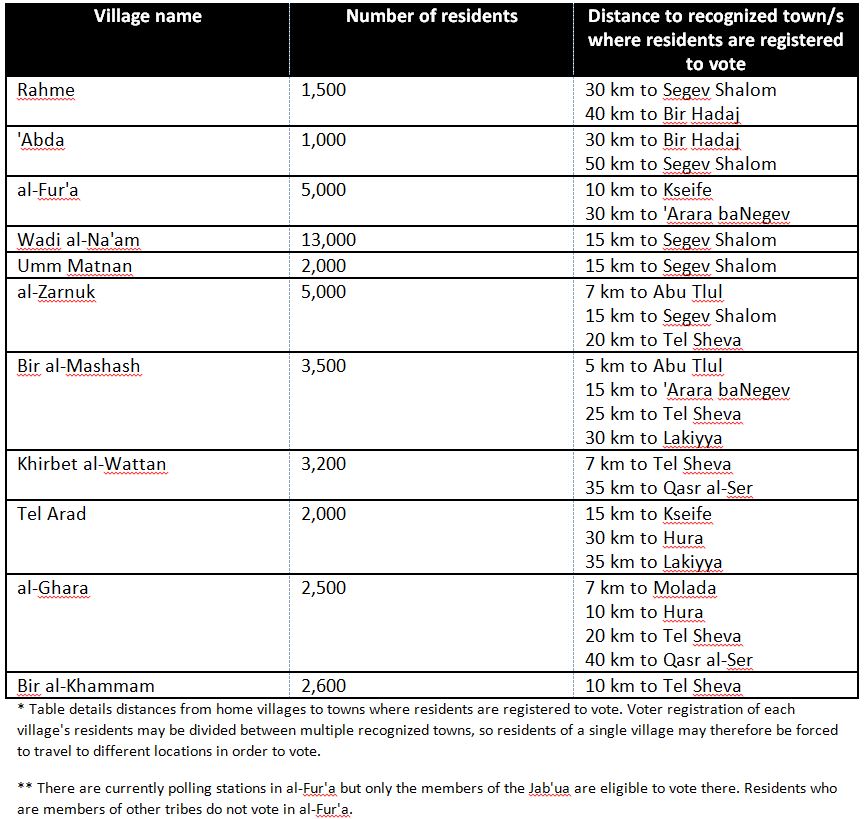