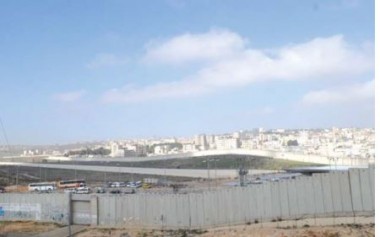 Israeli soldiers attacked, Friday, dozens of Palestinians holding the weekly protest against the Annexation Wall and colonies, in Kafr Qaddoum town, in the northern West Bank district of Qalqilia, wounding three, and causing dozens of suffer the effects of teargas inhalation.

Media spokesperson of the Popular Committee in Kafr Qaddoum Morad Eshteiwy, said a large military force, and undercover soldiers, invaded the village, while firing dozens of rubber-coated steel bullets, gas bombs and concussion grenades, and clashes with scores of protesters.

Eshteiwy added that two Palestinians were shot with rubber-coated metal bullets in the back and abdomen, while a third Palestinian suffered burns and various cuts after a gas bomb struck him in his arm.

Medics provided them with the needed treatment, in addition to providing treatment to many Palestinians, who suffered the effects of tear gas inhalation.

Eshteiwy said the residents marched from the center of the village carrying Palestinian and South African flags, and chanted against the occupation, and the ongoing Israeli oppression and the apartheid policies against the Palestinian people and their lands.

“The Palestinian nonviolence resistance against this occupation and its racist apartheid policies will lead us to liberation and independence,” he stated, “Just like South Africa and India – we will achieve this liberation.”