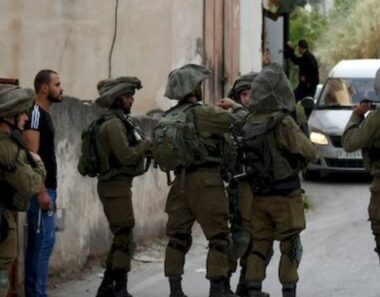 Israeli soldiers conducted, Thursday, various invasions into many parts of the occupied West Bank, before abducting several Palestinians in addition to injuring many others, while Israeli colonialist settlers continued their invasions into the courtyards of the Al-Aqsa Mosque and Joseph’s Tomb Mosque.

More than 900 Israeli colonialist settlers, accompanied by the police and the army, invaded the courtyards of the Al-Aqsa Mosque in occupied Jerusalem, after the army removed the Palestinian Muslim worshipers from the holy site.

During the invasion, the soldiers abducted two young Palestinian men and detained another, identified as Anwar Obeid, from the al-‘Isawiya town, in Jerusalem, before issuing an order banning him from entering the holy site for several months.

It is worth mentioning that Obeid is a former political prisoner, who was abducted and imprisoned several times, and was expelled from Jerusalem for four months.

The soldiers also closed the Bab al-Asbat (The Gate of the Tribes) area, and installed a roadblock, before preventing the Palestinians from crossing.

Also in Jerusalem, the soldiers invaded Sweih neighborhood in Silwan town, south of the Al-Aqsa Mosque, and abducted Ismael Kanaan, while he and his family were welcoming his brother, Ghazi, a political prisoner who was released from Israeli prisons after serving an 11-year prison term.

In addition, dozens of colonialist settlers, accompanied by the army, invaded the northern West Bank city of Nablus, before heading to Joseph’s Tomb site, in the eastern part of the city.

The invasion led to protests, especially after the army closed the area and prevented the Palestinians from entering it.

One Palestinian, identified as Abdul-Salam Salman, was shot with a rubber-coated steel bullet in the head, and was moved to a local hospital.

In addition, the Israeli police abducted Nizar Hanaisha, from Qabatia town south of the northern West Bank city of Jenin, while he was working in occupied Jerusalem.

In Hebron, in southern West Bank, the soldiers invaded and searched many homes in Beit Ummar and Doura towns, north and south of the city, and abducted Mohammad Abu Mariya in addition to Nayef Shawamra.

In Tubas, in northeastern West Bank, the soldiers abducted one Palestinian, identified as Kamal Jamal Daraghma, from his home in the city.

In addition, the soldiers shot a Palestinian, who works at the General Intelligence Service in Tubas, with two live rounds in the chest and shoulder, while standing in front of the building when the army invaded Tubas.