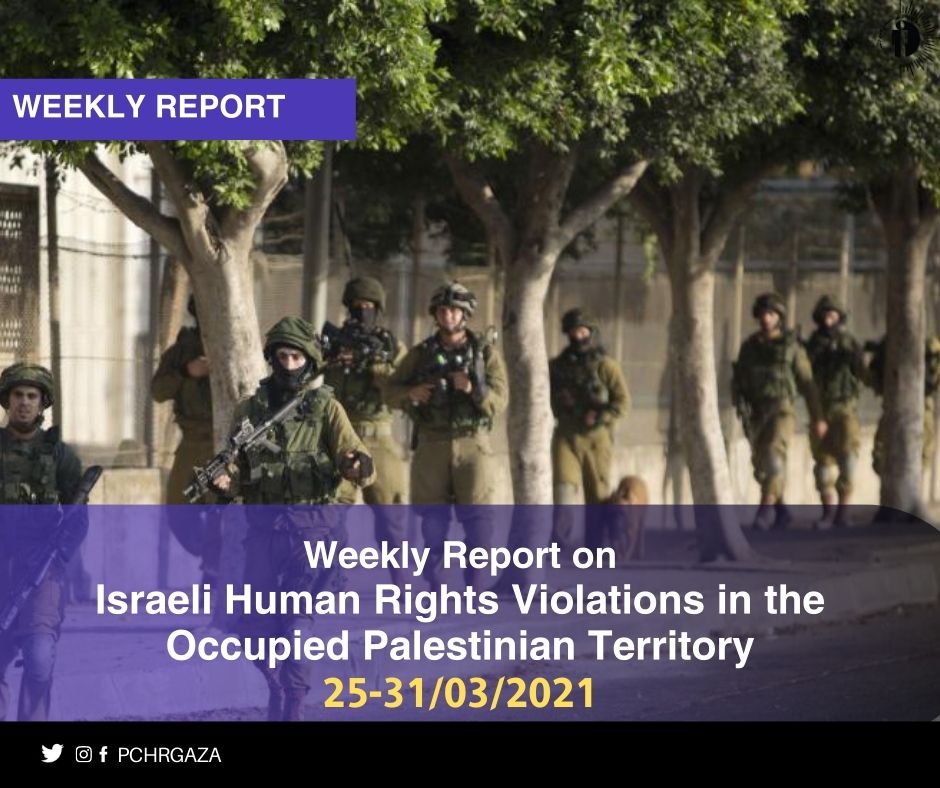 Israeli occupation forces (IOF) continued to commit crimes and multi-layered violations against Palestinian civilians and their properties, including raids into Palestinian cities that are characterized with excessive use of force, assault, abuse and attacks on civilians that are mostly conducted after midnight and in the early morning hours. Even more, IOF continued its demolition operations and delivery of cease-construction and demolition notices in the West Bank, including occupied East Jerusalem. The Palestinian Centre for Human Rights (PCHR) documented 207 violations of international human rights law and international humanitarian law (IHL) by IOF and settlers in the oPt.

Four Palestinians, including two children, sustained wounds as a result of IOF excessive use of force against civilians in the West Bank: a child was wounded at the weekly Kufur Qaddoum protests in Qalqilia; another in a protest in Beit Dajan in Nablus; another child sustained wounds in an IOF raid on a former Palestinian prisoner’s house in occupied east Jerusalem, noting that the prisoner was released that same day after 20 years in Israeli prisons. Dozens of others suffocated due to tear gas inhalation, and others were wounded in IOF assault during raids on Palestinian houses across the West Bank.

In the Gaza Strip, 3 IOF shootings were reported on agricultural lands eastern Gaza; and 3 at fishing boats in the Gaza sea.

IOF carried out 121 incursions into the West Bank, including occupied East Jerusalem. Those incursions included raids of civilian houses and shootings, enticing fear among civilians, and attacking many of them. During this week’s incursions, 62 Palestinians were arrested, including 3 children and 2 women, including a journalist who was detained while conducting an interview. She was detained for several others before her release.

Hebron: cease-construction notice served against a house in eastern Yatta.

Bethlehem: cease-construction notice served against a retaining wall in Tuqu.

The Gaza Strip still suffers the worst closure in the history of the Israeli occupation of the oPt as it has entered the 14th consecutive year, without any improvement to the movement of persons and goods, humanitarian conditions and bearing catastrophic consequences on all aspects of life. The United Nations (UN) confirmed that the Gaza conditions are worsening, with deteriorating health, power, and water services. The UN emphasized that the Gaza Strip requires immense efforts in the housing and education sectors and to create job opportunities. “I was working in the village lands when someone called me to say that there were settlers damaging the agricultural room in Wadi Sousia. I immediately stopped working and headed to the land. When I arrived, the settlers ran away to the top of the Mountain and started throwing stones at me and my car, breaking its windshield. I could not bear it and called the settlement’s guard. An Israeli officer arrived, and I told him that I will not leave until they fix what they ruined. The officer told me to calm down and I will get what I want. All they did is trying to calm me down, and nothing happened as the officer told me to go and file a complaint to Ariel police station. I refused and went back. It was all in vain although I took photos of the settlers and the settler who damaged my car.” Posted by Palestinian Centre for Human Rights on Thursday, April 1, 2021