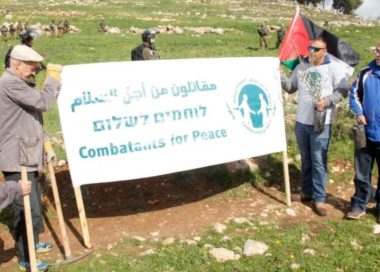 A number of landowners and Combatants For Peace activists suffered, Friday, the effects of tear gas inhalation after Israeli troops at participants of a solidarity action of planting olive trees on lands owned by farmers from the town of Beit Ummar, north of Hebron, in southern West Bank.

The activity today marked the World Agriculture Day. The action also aims to support the steadfastness of Palestinian farmers facing the illegal expansion of Israel’s colonies.

The protest took place on land Israel intends to confiscate to build the Annexation Wall, and is located near Gush Etzion colonialist Bloc. It is owned by the Abu Ayyash family, in the as-Souda area.

A soon as activist and land owners arrived on location, the army declared the site a closed military zone, trying to thwart the planting of the olive trees. 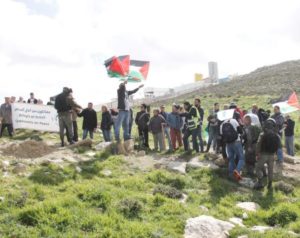 After the owners of the land and the activists refused to leave, and continued their action, the army attacked them with tear gas, as a result some participants suffered effects of tear gas inhalation.

Despite repeated attempts by the army to stop the activity, the activists continued to work and managed to plant more than 100 olive trees in the threatened land.

“We are here to stay on this land,” said Nasser Abu Ayyash, one of the owners of the land. “We have come here today with our partners from Combatants for Peace movement to plant olive trees to preserve this land.

For his part, Mr. Yousef Abu Mariya, coordinator of the Popular Committees against the Wall and Settlements in southern West Bank, explained “the occupation confiscated more than 650 dunums of land owned by Palestinian families in the land of As-Souda, between the town of Beit Fajjar and Beit Ummar. We are determined to stay on this land and continue activities with our friends from the Combatants for Peace movement to support the steadfastness of landowners.

During the week, occupation forces stormed the house of Mr. Yousef Abu Maria and threatened to arrest him if he continued the Friday action.

Moreover, Israeli settlers’ groups launched an incitement campaign against action and threatened through social networks to attack the participants. During the day, some armed settlers came over, and tried to start a fight, but the activist refused to engage with them.

Since the beginning of this year, Israeli and settler attacks on farmers and landowners in the Beit Ummar area have escalated. The occupation aims to confiscate these lands in order to build more settlement units.