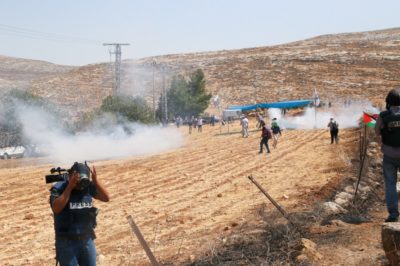 Scores of civilians were treated of the effects of tear gas inhalation,  Friday as Israeli troops attacked a nonviolent procession, and Friday prayers, in Kufur Malek village, east of Ramallah, in central West Bank.

Today’s protest prayers and March was organized by Kufur Malek village council, Fateh Movement chapter in Ramallah in corporation with Combatants for Peace Movement with the participation of international solidarity activists, Christian clergy, Jewish rabbis from the Rabbis Against the Occupation organization and the Palestinian Committee Against Wall and Settlements.

After holding the Friday prayers, people marched towards the nearby segregated road for illegal colonialist settlers, before Israeli troops showered them with tear gas and stun grenades, and as a result many were treated for the effects of tear gas inhalation.

Cars parked nearby sustained damage due to the tear gas bombs fired by soldiers. The soldiers also  assaulted protesters, medics and journalists.

The activity today started in the early hours of the morning when a group of villages and Combatants for Peace Movement activists erected a protest ten in Ein Samiyah area near the village.

The soldiers closed all roads leading the village to stop the action, however many were able to arrive to the location and hold the Friday prayers.

“The use of religion to steal land from its owners violates all heavenly laws,” said Father Abdullah Juli of the he Orthodox Church in Ramallah.

For his part, Mr. Jaafar Hamayel, from Fateh party, said during his speech “the Palestinian people will not allow the Israeli Prime Minister Netanyahu to use them as a tool to satisfy the settlers and win their votes in the coming Israeli elections”.

“We are continuing the popular struggle against the occupation and we will continue to support the steadfastness of our people in Kufur Malek to regain their lands, and remove the illegal settlement outpost,” said CFP activist Adam Rabea.

For seven years, the settlers of Kfar Shahar, built on the land of Kufur Malik, have been expanding their illegal colony, and seizing lands owned by the villagers, under the protection of Israeli soldiers as part of a plan to link and expand the settlement.

The first protest was organized in Kufur Malek  began in mid-August with a mass march against settlement and land confiscation to support the steadfastness of the villagers there.