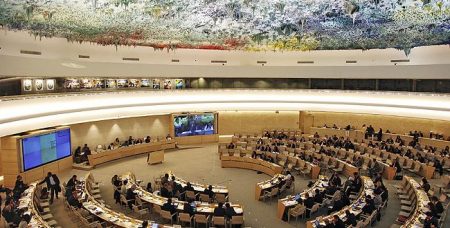 The U.S. presidential administration of Donald Trump is reviewing its participation in the top United Nations human rights body, with an eye to reform a balanced agenda that ends the forum’s “obsession with Israel”, a senior U.S. official said on Wednesday, according to Haaretz.

“In order for this Council to have any credibility, let alone success, it must move away from its unbalanced and unproductive positions,” Erin Barclay, U.S. deputy assistant secretary of state, told the UN Human Rights Council.

“As we consider our future engagements, my government will be considering the Council’s actions with an eye toward reform to more fully achieve the Council’s mission to protect and promote human rights.”

Two days ago. PNN further reports, PA president Mahmoud Abbas gave a speech in front of the council in Geneva, where he called on states to defend a two-state solution for the future of a Palestinian state.

Abbas asserted that Israel is moving towards the creation of an apartheid state with the passing of the new Israeli law legalizing dozens of Jewish outposts built on private Palestinian land.

In addition, he warned from moving the U.S. embassy from Tel Aviv to Jerusalem.

The United States is currently an elected member of the 47-state Geneva forum where its three-year term ends in 2019.