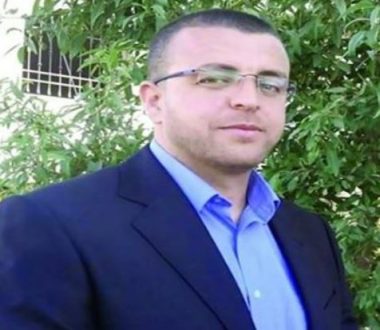 The Palestinian Prisoners Society (PPS) has reported, Wednesday, that detainee Mohammad al-Qeeq, 34, is ongoing with his hunger strike since February 6th, protesting his Administrative Detention, without charges, and is facing a deteriorating health condition.

The statement of the PPS came after one of its lawyers visited him in Ramla prison clinic, and said that the detainee is suffering from general fatigue, pain in his muscles, dizziness and regularly vomits yellow liquids.

The lawyer added that the detainee, who is also a journalist, is refusing medical treatment, and is determined to continue his strike, despite his bad health, until Israel ends his illegal detention.

Mohammad Al-Qeeq was abducted by the Israeli army on January 15, 2117, and was slapped with a three-month Administrative Detention order, without charges or trial.

The detainee, a married father of two children, and was repeatedly abducted and imprisoned by Israel, including when he held a 94-day hunger strike protesting his Administrative Detention.

Israel is even refusing to sign any agreement vowing not to renew his Administrative Detention orders, an issue that shows plans to keep him held for an extended period without any charges, or trial.