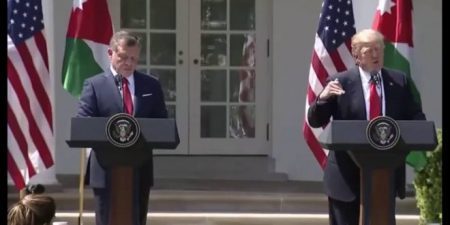 On Wednesday, the 5th of April, U.S. President Donald Trump and Jordan’s King Abdullah II both took part in a joint press conference in Washington D.C., where they discussed issues including the Middle East; Syria, Palestine and Israel were the primary focus.

Trump and Abdullah II both used the press conference to condemn the chemical attacks in Syria, according to the PNN, with Trump stating: “It crossed a lot of lines for me.  When you kill innocent children, innocent babies — babies, little babies — with a chemical gas that is so lethal — people were shocked to hear what gas it was — that crosses many, many lines, beyond a red line.  Many, many lines.”

King Abdullah II expressed his ‘gratitude towards Trump for his involvement in the Middle East and his eagerness to solve the core conflict in the region’, referring to the Israeli-Palestinian conflict.

The meeting between Donald Trump and King Abdullah II were the second since Donald Trump was inaugurated as president.