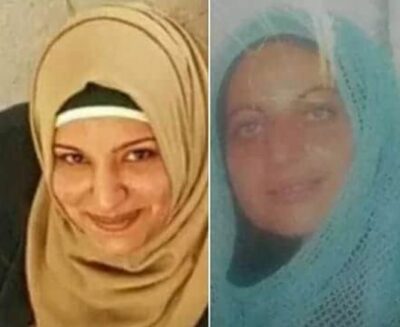 The Palestinian Commission for Detainees’ Affairs has reported, Sunday, that the Israeli authorities are still forcing two female detainees in solidarity confinement under inhumane and harsh conditions.

In a press statement, the Committee said that the two detainees, Fadwa Hamada and Jihan Hasheema, are in solitary confinement in the al-Jalama detention center, facing harsh conditions.

It added that the two women are held in a small room that is equipped with three surveillance cameras, and lacks the basic requirements for human use.

The two detainees told the Committee’s lawyer that they have been transferred to solitary confinement in al-Jalama without being allowed to bring their spare clothes or any of their belongings.

“We have been wearing the same clothes since we were moved here, they gave us one blouse each, in addition to toothpaste and broken toothbrushes,” they said, “When we are allowed to visit with our lawyer, the soldiers place chains on our legs, and do not provide us with masks. We also have not been allowed any visits with our families for many months.”