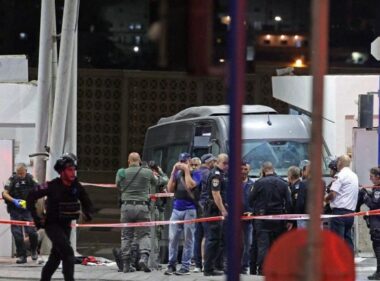 On Saturday night, Israeli sources confirmed that two Israeli officers were seriously injured in a shooting attack near Shu’fat, north of occupied Jerusalem in the West Bank. The Israeli army initiated a massive research campaign in the area, invaded homes, and abducted several Palestinians,

The sources said a Palestinian gunman arrived on foot before opening fire at the roadblock, critically wounding an 18-year-old female border police officer and seriously injuring a 25-year-old guard.

Both were rushed to Hadassah Israeli Medical Center in Jerusalem; another Israeli was reportedly mildly injured and was treated at the scene.

Preliminary investigation by the army revealed that the Palestinian arrived at the roadblock on foot before opening fire and ran towards a waiting car before it sped to Shu’fat refugee camp.

After the shooting, dozens of soldiers invaded the Shu’fat refugee camp, leading to protests, before the army broke into and ransacked Palestinian homes and abducted many Palestinians.

Furthermore, the Israeli army radio said one Palestinian turned himself in to the police after the army was looking for him, but he has no connection to the shooting.

Israeli Police Commissioner Kobi Shabtai said one of the abducted Palestinians is “suspected of involvement in the shooting” and added that the police and the army are looking for three other Palestinians, whose identities were known to police.

Hamas and the Islamic Jihad Movements issued statements praising the shooting and calling for ongoing resistance against the Israeli occupation in the West Bank, including Jerusalem.