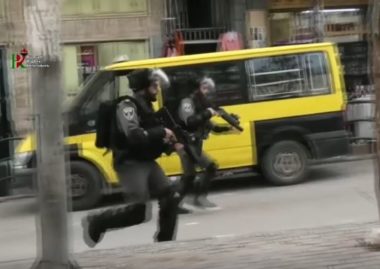 Palestinian media sources reported, on Sunday, that Israeli troops, stationed around the Alfawwar refugee camp in southern Hebron city in the West Bank, opened fire towards local Palestinian youths, injuring at least two of them.

The sources said that the Israeli army’s fire came amidst protests by angry youths, at the entrance of the Alfawwar refugee camp, in the southern occupied West Bank..

They added that Israeli soldiers, who responded to Palestinian stone throwers, in Alfawwar, shot and wounded two young men.

Medical sources in the area confirmed that one of the two injuries was by a live round, while the other was hit by a rubber-coated steel bullet. Both cases were transferred to a nearby hospital for treatment.

Recently, Arab-Palestinian Muslim residents of Hebron city, have expressed their anger against what they consider to be Israeli plans to change the demographic of the ancient Islamic shrine of the Al-Haram Al-Ibrahimi Mosque.

The reported plans have been rejected by many regional and international bodies.

The Al-Azhar Al-Sharif Grand Islamic Institution in Egypt, issued a statement this week, in which it denounced what it described as Israeli schemes to transform the holy Islamic shrines of Hebron city.

Over the past four decades, Israel has escalated its illegal colony construction in and around the old city of Hebron, where currently, tens of thousands of Israeli settlers live in several illegal settlements.