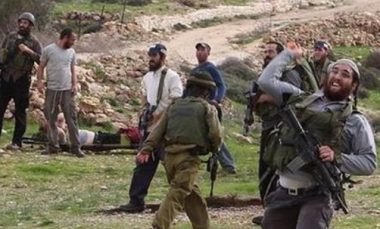 Palestinian medical sources have reported, Saturday, that four Palestinians have been injured, two of them suffered life-threatening wounds, after being assaulted by several extremist Israeli colonists near Ramallah.

The attack took place in the al-Batha area, close to Talmon illegal colony, that was built on privately-owned Palestinian lands.

The Palestinian Red Crescent (PRC) said its medics rushed four Palestinians to hospitals, two of them who suffered serious wounds, after being assaulted by Israeli colonists while harvesting their olive trees.

It added that the seriously wounded Palestinians, Saber Barakat Abu Fkheitha, was suffered several injuries in the head, while his brother, Hassan, and their cousin Mohammad Ahmad Abu Fkheitha, suffered moderate wounds, and a fourth Palestinian suffered a mild injury.

Attacks by illegal Israeli colonists in the occupied West Bank are very commons, and largely go investigated by the military and police, and usually significantly escalate during the olive harvest season.

Such attacks include cutting or uprooting trees, flooding Palestinian lands with waste-water, and burning many trees or farmlands.