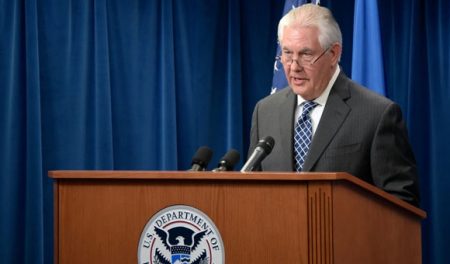 Secretary of State Rex Tillerson delivers remarks during a press event in Washington, on March 6, 2017, broke with precedent and did not participate in the launch of the 2016 State Department Human Rights Reports. (Photo: U.S. Department of State)

The report noted a “significant increase in detentions of minors” in 2016, and that “Israeli authorities continued to use confessions signed by Palestinian minors, written in Hebrew.” It also highlighted the renewed use of administrative detention against Palestinians, including children.

The report highlights the fatal shooting of 15-year-old Mahmoud Rafat Badran near the West Bank village of Beit Ur Al-Tahta on June 21, 2016. Six teenage cousins and a driver were in a car heading home around 1:30 a.m. after a night of family fun at a swimming pool in the nearby West Bank village of Beit Sira. Israeli soldiers opened fire on them as they drove through an underpass beneath Route 443. Mahmoud Rafat Badran died at the scene. Two of his cousins and the driver were injured.

Omitted from the report was the February 26, 2016 killing of Mahmoud Shaalan, a 16-year-old who held U.S. citizenship. Israeli soldiers shot and killed Mahmoud as he allegedly attempted to stab them at a military checkpoint near Beit El settlement, north of the West Bank city of Ramallah. A witness waiting to cross the checkpoint in his car told DCIP that he saw the teenager approach the soldiers and he did not appear to be carrying a weapon in his hands. He then heard three gunshots and decided to turn his car around, at which point he saw a soldier fire two shots at Mahmoud while he was already on the ground.

Typically, the secretary of state launches the report and provides brief remarks that highlight specific findings included in the report. However, in a break with precedent, Secretary of State Rex Tillerson did not launch the report on-camera and in person.

Each year the U.S. Department of State drafts and publishes country reports on human rights practices, known as the Human Rights Reports, that cover the situation of human rights in countries around the world. The reported is mandated by Congress.

Since 2007, each annual country report on Israel and the OPT has included data and information on ill-treatment and torture of Palestinian children in Israeli military detention, denial of fair trials rights in Israeli military courts and other grave violations against children committed by Israeli forces and settlers.