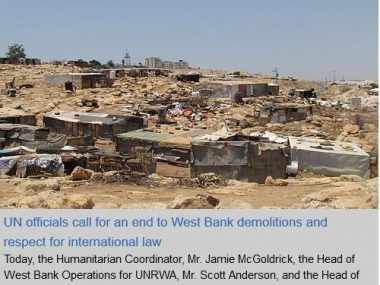 The Following is a statement by the United Nations Office for the Coordination of Humanitarian Affairs in the Occupied Palestinian Territory (OCHA) :

Today (Thursday), the Humanitarian Coordinator, Mr. Jamie McGoldrick, the Head of West Bank Operations for UNRWA, Mr. Scott Anderson, and the Head of the UN Office for the High Commissioner for Human Rights, Mr. James Heenan, expressed serious concern over demolitions and related events in vulnerable Palestinian communities in the central West Bank.

Yesterday, Israeli forces began levelling access routes in the Palestinian Bedouin community of Khan al Ahmar-Abu al Helu, home to more than 180 people, 95 per cent of whom are Palestine refugees. The work comes in advance of the expected demolition of the entire community.

Israeli forces injured thirty-five Palestinians and arrested others, including residents, in confrontations that ensued while bulldozers were levelling all entry and exit points. One Israeli soldier was also reported injured as well. Today, the Israeli authorities have declared Khan al Ahmar a closed military area, and are heavily restricting movement of residents and preventing the entry of others to the community.

“What we are seeing unfold on the ground is deeply disturbing,” said Mr. McGoldrick. “Demolitions have a devastating impact on families and on communities. These demolitions are particularly outrageous because they target communities who already live in extremely difficult conditions, with high levels of humanitarian needs. I call again on the Israeli authorities to cease demolitions and other measures that may result in the forcible transfer of Palestinians.”

This situation occurs on the backdrop of a wave of demolitions across the West Bank in recent days. Since 1 July, eleven incidents have occurred, displacing 59 Palestinians, including 37 children, and affecting more than 200 others.

Included within this is the demolition of 19 structures, including nine homes, in the Palestinian Bedouin community of Abu Nuwar (around 600 residents, 88 per cent Palestine refugees). As a result, 51 people, including 33 children, were displaced and another 13 people, including five children, who had family property destroyed, were directly affected. Also, one home was destroyed today in Susiya, displacing a family of five.

“The escalation of events in the last few days – the demolitions in Abu Nuwar, the declaration of the Khan al Ahmar community as a closed military zone, the violence and large presence of armed Israeli forces – makes life in these communities virtually untenable. The latest developments are of serious concern as it is evident that they are undertaken with the objective of relocating the concerned communities, as well as causing serious distress to the vulnerable residents who are watching what appear to be preparations for the demolition of their community,” said Mr. Scott Anderson. “These pastoral communities are mostly Palestine refugees – originally displaced from their tribal lands in the Negev. They should not be forced to experience a second displacement against their will.”

“The demolitions in the community will have serious human rights and humanitarian law consequences,” said Mr. Heenan. “There is high risk of forced evictions of individuals, destruction of private property as well as a dramatic increase in the coercive environment under which the community already lives, in turn raising the risk of forcible transfer.”

Khan al Ahmar – Abu al Helu and Abu Nuwar are among the 46 Palestinian Bedouin communities (8,100 people) at risk of forcible transfer in the central West Bank and among the more than 3,500 residents living in 18 communities located in the area slated for the E1 settlement plan that seeks to connect the Ma’ale Adummim settlement bloc with East Jerusalem.

International humanitarian law (IHL) requires an occupying power to protect the population of the territory that it occupies, ensure its welfare and wellbeing, as well as the respect for its human rights. Any destruction of property by the occupying power is prohibited, except when rendered absolutely necessary by military operations, which is not relevant in the West Bank where there are currently no active hostilities.

The extensive demolition of property, not justified by military necessity and carried out unlawfully and wantonly, may be a grave breach of the Fourth Geneva Convention and may amount to a war crime. Other than for the security of the population or imperative military reasons, IHL further prohibits the transfer of the population of an occupied territory without the genuinely and fully informed consent of the affected people, regardless of the motive.

Consent is not considered genuine in an environment marked by the use or threat of physical force, coercion, fear of violence or duress. In the absence of such consent, the transfer is forcible and constitutes a grave breach of the Fourth Geneva Convention.