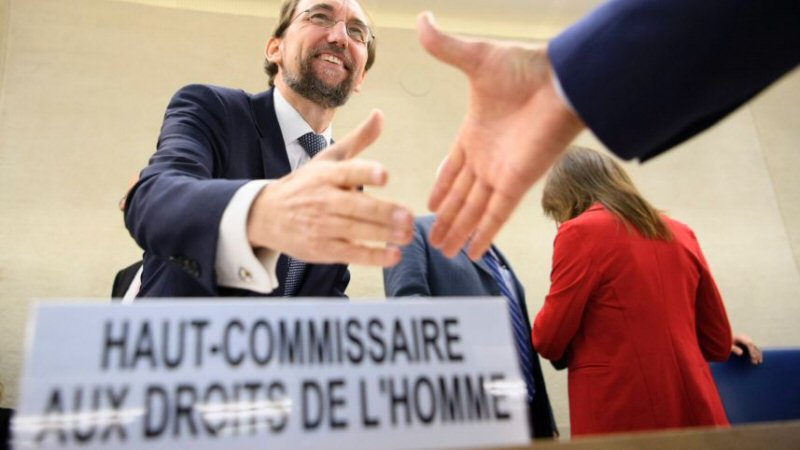 Zeid Ra’ad Al Hussein, UN High Commissioner for Human Rights, shakes hand with delegates before the opening of the 36th session of the Human Rights Council, at the European headquarters of the United Nations. Credit: Laurent Gillieron/AP

Media reports reveal that the UN High Commissioner for Human Rights began sending letters, two weeks ago, to 150 companies in Israel and around the globe, warning them that they could be added to a database of complicit companies doing business in illegal Israeli settlements based in the occupied Palestinian West Bank, including East Jerusalem.

The letters reminded these companies that their operations in and with illegal Israeli settlements are in violation of “international law and in opposition of UN resolutions.” They also requested that these companies respond with clarifications about such operations.

According to senior Israeli officials, some of the companies have already responded to the UN High Commissioner for Human Rights by saying they won’t renew their contracts or sign new ones in Israel. “This could turn into a snowball,” worried an Israeli official.

Of the 150 companies, some 30 are American firms, and a number are from nations including Germany, South Korea and Norway. The remaining half are Israeli companies, including pharmaceutical giant Teva, the national phone company Bezeq, bus company Egged, the national water company Mekorot, the county’s two biggest banks Hapoalim and Leumi, the large military and technology company Elbit Systems, Coca-Cola, Africa-Israel, IDB and Netafim.

The Trump administration is reportedly trying to prevent the list’s publication.

It may be too ambitious to expect this courageous UN accountability measure to effectively take Israel “off the pedestal,” as South African anti-apartheid leader Archbishop Desmond Tutu once called for. But if implemented properly, this UN database of companies that are complicit in some of Israel’s human rights violations may augur the beginning of the end of Israel’s criminal impunity.

The Palestinian BDS National Committee (BNC) is the largest coalition in Palestinian civil society. It leads and supports the global Boycott, Divestment and Sanctions movement. Visit their website and follow us on  Facebook and Twitter @BDSmovement.