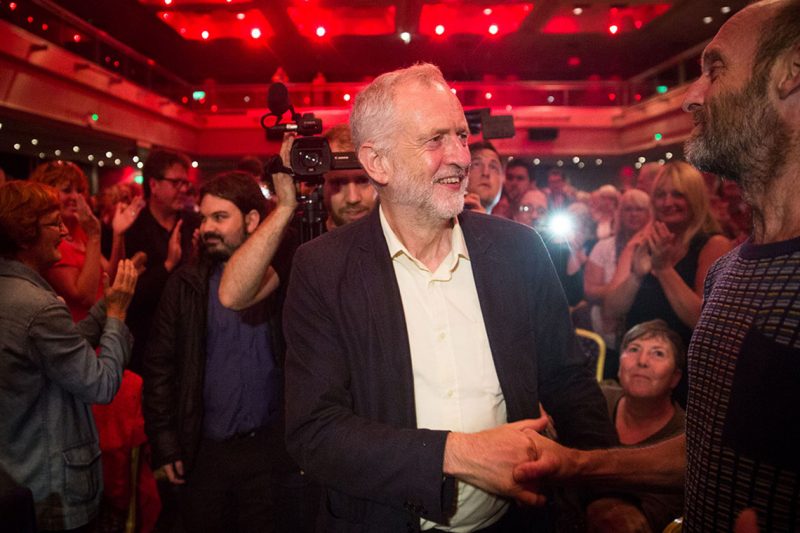 by Yvonne Ridley, Days of Palestine

This has not been a good week for Israel, especially in Britain, where the Zionist lobbyists have spent millions in recent years oiling the cogs in Westminster to persuade politicians of all stripes to give their unconditional support to their favourite state. It has worked rather well for them, with Labour Party leaders like Tony Blair, Gordon Brown and Ed Miliband joining their counterparts in the Tory Party as “Friends of Israel” along with the majority of their ministers and shadow ministers.

However, after this week’s triumphant Labour Party conference in Brighton it looks as if the pro-Israel lobby has lost its grip on the party led by Jeremy Corbyn. If anyone had any doubt that the Zionist influence has all but gone, it was dispelled by the Labour leader’s speech.

“And let’s give real support to end the oppression of the Palestinian people, the 50-year occupation and illegal settlement expansion and move to a genuine two-state solution of the Israel-Palestine conflict,” Corbyn roared. “Britain’s voice needs to be heard independently in the world,” he added to cheers from around the conference hall. As if to reinforce that this was not some sentence thrown in at random, Corbyn fired a warning shot to Israel’s greatest friends in Washington for good measure: “We must be a candid friend to the United States, now more than ever.”

There was also a Corbyn broadside aimed at the President of the United States: “The values we share are not served by building walls, banning immigrants on the basis of religion, polluting the planet, or pandering to racism. And let me say frankly, the speech made by the US President to the United Nations last week was deeply disturbing. It threatened war and talked of tearing up international agreements. Devoid of concern for human rights or universal values, it was not the speech of a world leader.”

Clearly relishing his time in the spotlight, Corbyn rubbed salt into the wound. “Our government has a responsibility,” he pointed out. “It cannot meekly go along with this dangerous course. If the special relationship means anything, it must mean that we can say to Washington: that way is the wrong way. That’s clearly what’s needed in the case of Bombardier where thousands of jobs are now at stake. A Prime Minister betting our economic future on a deregulated trade deal with the US might want to explain how 220 per cent tariffs are going to boost our exports. So let Britain’s voice be heard loud and clear for peace, justice and cooperation.”

Corbyn’s message will be especially well-received in Northern Ireland, where 4,500 jobs are under threat after it emerged that a ruling on punitive tariffs by the US plunged the Canadian-owned Bombardier Inc. into crisis after threatening to make its key C Series jet all but unsellable.

It was sensational stuff. A shot in the arm for Palestine, a slap in the face to the US and lots of talk of peace and justice from a political leader who is no longer the butt of jokes or political satire. Like it or not, Labour is a party ready to take office; in a climate where Britain’s current Prime Minister is hanging on to her job by a thread, some political observers are already talking about “when” Jeremy Corbyn becomes Prime Minister, and not “if”.

One can only guess what Australian-born Mark Regev makes of it all. He might even tear down his anti-BDS war room charts in Israel’s London Embassy now and focus instead on how to stop Labour from forming the next British government. The Israeli Ambassador was left reeling after being snubbed publicly by Corbyn this week, so his aides could well have been reaching for the smelling salts when the Labour leader pledged to give “real support” to Palestine. To add to the ambassador’s misery, that particular comment brought the loudest cheers and applause from the audience.

Regev, clinging to the comfort blanket of victimhood that he keeps to hand in case of emergency, condemned what he alleged was “anti-Jewish bigotry” at the Labour conference after Jeremy Corbyn didn’t show up at a pro-Israel reception. He made his claim at a Labour Friends of Israel event, where those present shouted “where is he?” and “why isn’t he here?” when it was revealed that Mr Corbyn would not be appearing alongside the former spin-doctor who sought to justify the killing of children, women and men when he was Benjamin Netanyahu’s mouthpiece during successive Israeli military offensives against civilians in the Gaza Strip.

Shadow Foreign Secretary Emily Thornberry told the pro-Israel gathering that the Labour leader was “not attending any of these receptions” on Tuesday night in order to prepare for his keynote conference speech on Wednesday. However, photographs later emerged showing that Corbyn had turned up at a Daily Mirror party, where shadow ministers were in karaoke mood.

“The Labour movement has a proud history of supporting Zionism,” said Regev. “So to those who called for the expulsion of Zionists from the Labour Party on Monday, I ask, would you have expelled some of Labour’s greatest luminaries too?” The ambassador was clearly rattled by the humiliating snub.

Thornberry insisted that Labour is “completely committed” to a two-state solution in the Middle East. She added, pointedly, that it is “completely inappropriate for those on the fringes of the Labour Party, on the fringes of this conference, to try to strangle that debate.” In a written statement to the pro-Israel reception, Corbyn said, “Labour will continue to campaign for peace through a two-state solution, a secure Israel alongside a secure and viable Palestinian state. I look forward to working with you all to achieve that together.”

The powerful leader of the Unite union, Len McCluskey, is a close ally of Corbyn. He claimed later that allegations of anti-Jewish sentiment within the party are “mood music” created by those wanting to “undermine” the Labour leader.

To add to the misery of Regev and his lobbyists, it was announced on Wednesday that Interpol is to admit Palestine as a member of the International Police Organisation, despite Israel’s strong opposition to the Palestinian Authority joining any international body, arguing that it is not a state. The last time that the PA applied to join Interpol was last year, in Indonesia, where Israel’s lobbying paid off when the application was rejected.

This time, though, the Zionist state hasn’t been so lucky, and the PA may well use its membership of Interpol to have “red notices” issued against senior Israeli officials, something that Israel dreads. Interpol itself doesn’t issue arrest warrants — its members do that — but a red notice is a trigger which would make overseas travel very difficult for those Israelis suspected of war crimes and crimes against humanity.

Benjamin Netanyahu cheered last year and gloated that his country’s diplomats had secured a major victory in denying the PA Interpol membership. What will he make of the announcement today? And, indeed, the news from the Labour Party conference? Alarm bells must be ringing.

Nevertheless, Regev and Netanyahu can at least reassure themselves that the pro-Israel lobby is alive and well within the ranks of Tory MPs, and no doubt Prime Minister Theresa May will reassure Tel Aviv of this during the Conservative Party conference next week. Such reassurances from a lame duck PM and a government declining in popularity, though, will be cold comfort to the wounded Israelis. Not only are they losing their friends in one party, but those in the other are losing their influence. Dark days ahead, then, which means a ray of hope for the beleaguered people of Palestine as the pro-Israel lobby loses its grip on Westminster.

Yvonne Ridley is an author, famous journalist and film-maker Yvonne is a committed peace activist, champion of civil liberties and advocate for women’s rights. She was on the first international flotilla to sail to Gaza in 2008.