Under BDS Pressure, G4S Ends Most Illegal Business with Israel 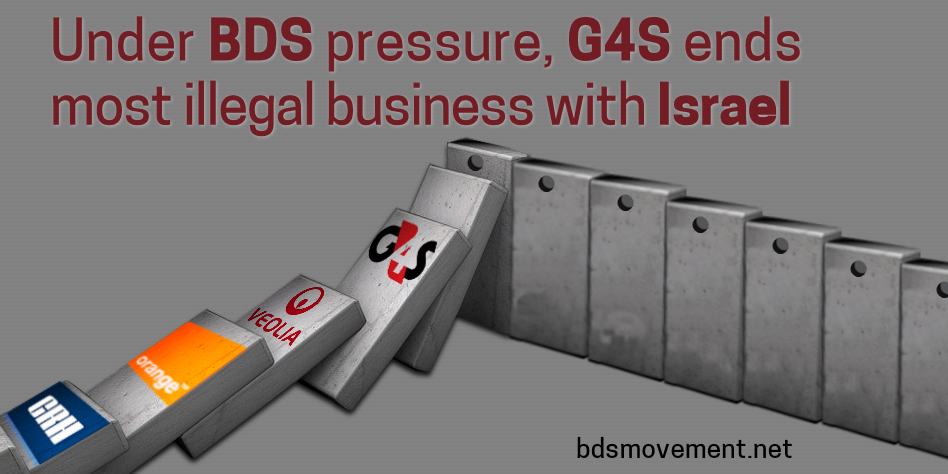 5:27 PM
Human rights campaigners to intensify pressure against the company…

The worldâ€™s largest security company, G4S, announced today that it is selling most of its Israeli business after an effective campaign against the company, waged by the Palestinian-led, global Boycott, Divestment and Sanctions (BDS) movement for Palestinian rights, caused it â€śreputational damage.â€ť

Reacting to the breaking news and to the fact that G4S will nonetheless maintain some illegal projects in Israel, Rafeef Ziadah, speaking for the Palestinian BDS National Committee (BNC), said:

â€śWe have succeeded to push one of the worldâ€™s largest corporations into selling its key business in Israel. Our globally coordinated campaign has had a real impact. We will continue campaigning until G4S ends all involvement in violations of Palestinian human rights.â€ť

French multinationals, Veolia and Orange, and Irelandâ€™s largest building materials company, CRH, have all exited the Israeli market since September 2015, mainly as a result of BDS campaigning.

â€śA domino effect is at play here,â€ť said Ziadah. â€śSome investment fund managers are recognizing that their fiduciary responsibility obliges them to divest from international and Israeli corporations and banks that are complicit in Israelâ€™s persistent violations of international law.â€ť

â€śIt is not everyday that human rights campaigners can compel a massive multinational like G4S to end its involvement in serious human rights violations through sustained, strategic grassroots pressure. BDS is clearly working, and other complicit multinationals, like HP and Alstom, should take notice.â€ť

â€śWe dedicate this victory to all Palestinian political prisoners who in 2012 had called on the BDS movement to intensify our boycott of G4S due to its role in Israelâ€™s prisons, where torture is rife.â€ť

G4S is a British security company that helps Israel run prisons where Palestinian political prisoners are held without trial and subjected to torture and ill-treatment. It is also involved in providing equipment and services to Israeli military checkpoints, illegal settlements and to military and police facilities.

The international Stop G4S Campaign has cost the company contracts worth millions of dollars in Europe, the Arab world, South Africa and elsewhere.

Despite the sale of its subsidiary, G4S will remain directly complicit in Israel’s violations of Palestinian rights through Policity, the flagship national police training centre it co-owns, and the settlement-profiteer Shikun & Binui group.

Israelâ€™s police operates in occupied East Jerusalem, instead of the Israeli military in the rest of the occupied Palestinian territory, serving as the guardian of Israelâ€™s illegal annexation, protecting the illegal settlements, and oppressing the cityâ€™s Palestinian population.

â€śThe BNC is determined to continue its campaign against G4S, in partnership with other justice struggles across the world. From the US to Palestine, from South Africa to the UK, G4S is profiting from the patently racist mass incarceration business.â€ť

â€śAs in the struggle against apartheid South Africa, BDS pressure against Israelâ€™s regime of occupation, settler-colonialism and apartheid is making some of the worldâ€™s most powerful multinationals realize that profiting from Israelâ€™s violations of Palestinian rights is not just unethical and socially-irresponsible. It is downright bad for business as well.â€ť

« Umm al-Hiran: A Village Off the Maps Yasser Arafat Commemorated with $7m Museum »