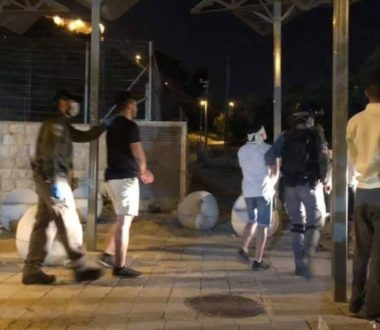 The Wadi Hilweh Information Center in Silwan (Silwanic) has reported that the undercover soldiers infiltrated into the Central Neighborhood of the town, in occupied East Jerusalem and kidnapped the thirteen Palestinians, including four children.

Silwanic added that the officers repeatedly assaulted the Palestinians with clubs and batons, before moving them to the Police Station in Salahuddin Street, in Jerusalem.

Mohammad Mahmoud, a Palestinian Lawyer working or Silwanic, said he managed to visit with the abducted Palestinians, and observed their cuts and bruises resulting from being assaulted while being kidnapped and apparently in the police station itself.

He added that the Israeli army and police are alleging that the thirteen Palestinians are “involved in throwing Molotov cocktails at army vehicles,” during invasions into their town.

The Palestinians have been identified as: