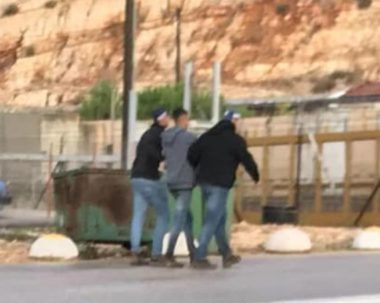 Eyewitnesses said the soldiers, in civilian clothes, ambushed and abducted the young man, who remained unidentified at the time of this report, near the military roadblock.

The undercover soldiers then took the young man to the soldiers at Barta’a military roadblock, before he was moved to an unknown destination.

In Ramallah, in central West Bank, the soldiers invaded a printing press in the Nahda Street, in the center of the city, and confiscated printing equipment and various posters.

Many Palestinians protested the invasion, and hurled stones at the soldiers, who fired rubber-coated steel bullets and gas bombs.

Also at dawn, the soldiers invaded Hebron city and several surrounding towns, in the southern part of the occupied West Bank, violently searched homes, before abducting five Palestinians, including two siblings, and confiscated a car.

In related news, dozens of soldiers invaded Jenin refugee camp, in the northern West Bank city of Jenin, shot and injured four Palestinians, including three children, and abducted two others, during protests that took place after the soldiers stormed and searched homes.