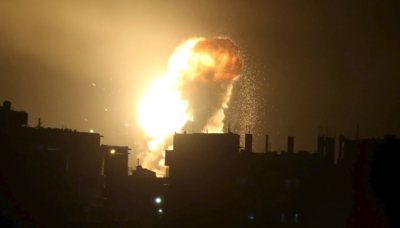 Israeli ongoing airstrikes against the northern part of the Gaza Strip have left three Palestinians dead, and at least five others wounded, said WAFA sources.

Mohammad Zakariya al-Tatri, age 27, and Mohammed Zohdi Odeh, 22, were killed in Israeli airstrikes targeting the northern part of the Strip.

Furthermore, Hamad Mohammad al-Nahal, 23, was also killed in an airstrike that targeted the eastern part of Rafah city, in southern Gaza.

At least five Palestinians were injured, three of them east of Deir al-Balah in Central Gaza, two in Beit Lahia, in northern Gaza.

In addition, the Israeli Air Fore fired missiles into the Al-Aqsa TV station in Gaza.

The army first fired a “warning missile” into the station, then later fired another missile at it. The TV station broadcast was stopped, but was later restored.

Furthermore, Israeli daily Haaretz said Palestinian fighters in Gaza fired at least 300 shells into Israeli areas, Monday, including an anti-tank missile which seriously injured a soldier, 19 years of age, and mildly wounding the driver, 25, who suffered from “shock.”

It added that ten Israelis were wounded, including a woman and a man, who suffered serious and moderate wounds.