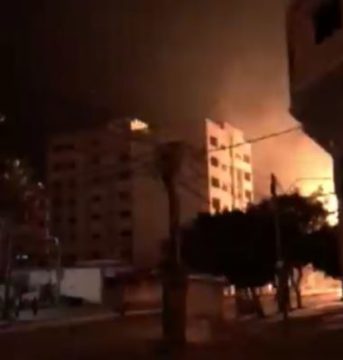 As the extensive Israeli air strikes continued over various parts of the Gaza Strip, the army fired missiles at a hotel, west of Gaza city, and destroyed it.

Media sources in Gaza said the Israeli Airforce fired many missiles into the Al-Amal Hotel, in the densely populated al-Mina’ Area, west of Gaza city.

The five-story hotel was leveled to the ground, before rescue teams and firefighters rushed to the area.

There have been no immediate reports of casualties among the Palestinians due to the bombing, but it also caused damage to surrounding buildings.

It is worth mentioning that the army also fired missiles at many residential buildings and homes in the Gaza Strip, in addition to targeting the Al-Aqsa Satellite TV station in Gaza.

Furthermore, the Al-Qassam Brigades, the armed wing of Hamas, published a video documenting its fighters striking an Israeli military bus, across the perimeter fence in northern Gaza with a missile.