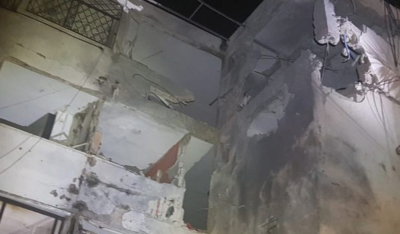 A day after the Israeli military invaded Gaza in a flagrant violation of the ceasefire negotiated with Palestinian factions, Palestinian resistance fighters fired several hundred crude homemade shells into Israel. One of these shells hit an apartment building in Ashkelon, killing a 48-year old man and wounding two women.

Update: Israeli daily Haaretz has reported that the man is reportedly from the southern West Bank city of Hebron, and not an Israeli citizen, and added that his identity is yet to be confirmed.

The shells fired by the Palestinian resistance rarely explode on impact, and cause damage only when they directly hit a building, putting a hole in the roof of the building about a foot in diameter. They can be deadly if they directly hit a person, but such direct hits are rare as they are fired blindly from Gaza into Israel with no way to aim them.

The Israeli bombs dropped on Gaza, in contrast, are highly sophisticated with laser-guided targeting and massive firepower. The bombs are each at least 250 lbs of explosives, and multiple bombs are dropped on each target. On Monday alone, Israeli bombs obliterated at least six multi-story buildings.

The escalation begun by Israel on Sunday came after more than seven months of weekly non-violent demonstrations by Palestinian civilians at the border fence – during which time no recognized Palestinian resistance groups fired shells into Israel, but over 200 Palestinians were killed with more than 20,000 wounded – 4,000 of whom were wounded with live ammunition fired by Israeli forces at the demonstrators.

The Israeli medical service Magen David Adom reported that they had treated 23 Israelis for light injuries from shrapnel and smoke inhalation, in addition to the two Israelis critically injured in the shelling that killed one in Ashkelon Monday night.

The Israeli Security Cabinet plans to convene on Tuesday to plan Israel’s next steps in this latest military assault on Gaza, in which 3 Palestinians were killed on Monday and 7 on Sunday, as well as dozens wounded from shrapnel, artillery fire and live ammunition fired from military bases along the Gaza-Israel border.

The Israeli military spokesperson responded to the shells fired in response to Israel’s invasion of Gaza on Sunday by blaming Hamas, claiming, “Hamas is leading the Gaza Strip towards destruction”.

The Israeli military stated that around 300 shells were fired from the Gaza Strip into Israel, 60 of which were intercepted by Israel’s ‘Iron Dome’ defense, in which surface-to-air missiles are fired to intercept the shells in mid-air. The vast majority of the remainder of the shells landed in open areas and the Negev Desert.