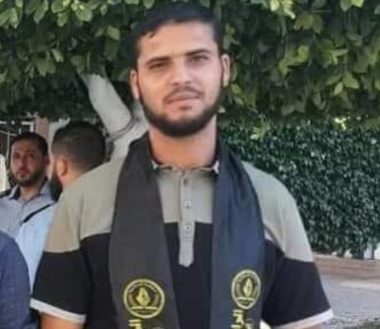 The Palestinian Health Ministry has confirmed that a young man died, on Tuesday at dawn, from serious wounded her suffered, on Monday evening, after Israeli soldiers fired missiles into an area, east of Rafah, in the southern part of the Gaza Strip. One Palestinian was killed by a shell fired from Gaza into Asqalan.

It said that the Palestinian has been identified as Mousa Eyad Abdul-Al, 22, from Rafah, and added that he succumbed to his serious wounds.

The Al-Quds Brigades, the armed wing of the Islamic Jihad in Palestine, said the Palestinian was one of its members.

He was injured when the Israeli Army and Air Force fired missiles and shells into several parts of the Gaza Strip, killing three Palestinians and wounding dozens, some seriously.

The slain Palestinians have been identified as Mohammad Zakariya al-Tatri, 27, and Mohammed Zohdi Odeh, 22, who were killed in Israeli airstrikes targeting the northern part of the Strip, in addition to Hamad Mohammad al-Nahal, 23, was also killed in an air strike that targeted the eastern part of Rafah city.

The army also fired many missiles into several parts of the Gaza Strip, including three that struck the Ansar Security Compound, west of Gaza city, destroying it and caused damage to many homes.

Many missiles also struck areas in the southern and western parts of Gaza city, in addition to Khan Younis, in the southern part of the coastal region, and in Deir al-Balah, in central Gaza.

In related news, a Palestinian, identified as Mahmoud Abdul-Hamid Abu Asba, 48, from Halhoul town, north of the southern West Bank city of Hebron, was killed by a mortar which was fired by Palestinian fighters in Gaza, into an area in Asqalan (Ashkelon).

Abu Asba, a married father of six, works in Asqalan, and left his home for work in Asqalan, last Sunday.

On Sunday at night, Israeli soldiers killed seven Palestinians, including two senior members of the Al-Qassam Brigades, the armed wing of Hamas,

The attack took place after undercover Israeli soldiers infiltrated into the Gaza Strip, and assassinated two senior leaders of the Al-Qassam Brigades, the armed wing of Hamas.

The army initiated a series of air strikes, and army fired missiles and shells to secure the retreat of its undercover soldiers, killing five other Palestinians. Hamas fighters exchanged fire with the soldiers killing one of them.