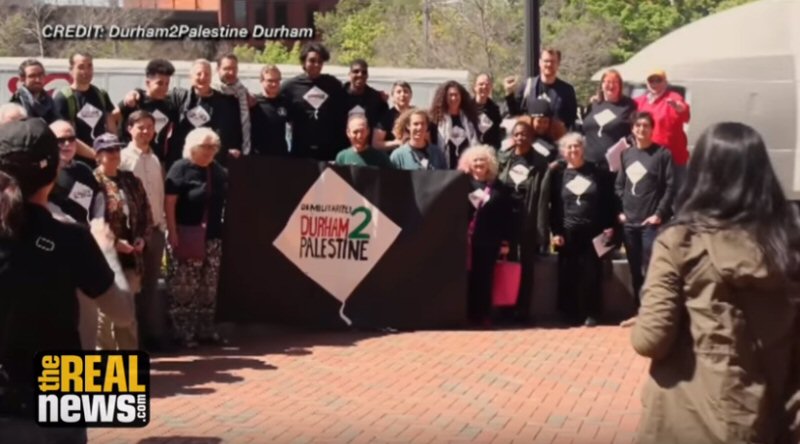 BEN NORTON: It’s The Real News. I’m Ben Norton. The City Council in Durham, North Carolina made history this month when it voted unanimously to prohibit police exchanges with Israel. Thousands of police officers from departments throughout the United States traveled to Israel to receive military-style training with Israeli military and police forces, some of which enforce an illegal Israeli military occupation of the Palestinian West Bank. And it’s not just local police that have trained in Israel, but also sheriffs, Border Patrol agents, ICE officers, and FBI agents. Durham is the first city in the U.S. to ban police exchanges with Israel.Jewish Voice for Peace, the largest grassroots Jewish organization working for the full equality of all people in Israel-Palestine, published a statement applauding the Durham City Council measure as a victory for human rights. JVP wrote, quote: “In a time of increasing concern about policing and police violence, in particular for communities of color, the city of Durham is leading the way in declaring that safety for all means demilitarizing the police force.”Joining us to discuss this is Rebecca Vilkomerson. Rebecca is the executive director of Jewish Voice for Peace. She was named one of the 50 most influential Jewish figures named worldwide by The Jerusalem Post in 2017, and she also frequently writes for major newspapers. Thanks for joining us, Rebecca.

REBECCA VILKOMERSON: Thanks for having me.

BEN NORTON: Can we just speak generally about this historic move here? We know that this move came after months of campaigning by civil rights groups, including activists that have been organizing against police brutality, and also groups that advocate for Palestinian rights. Can you talk about the grassroots campaign behind this, this historic measure?

REBECCA VILKOMERSON: I think it’s really important that we give all the credit to the Durham to Palestine Coalition, which is a really remarkable coalition of organizations in the triangle region of North Carolina. They’ve actually been working together for years, not months, and they’ve shown a remarkable ability to build a broad coalition. UIP 100 chapters, that’s the Black Youth Project. They have the JVP Triangle Chapter. They had Students for Justice in Palestine chapters. They had groups working against ICE detentions and raids. They have Muslim groups. A really wonderful coalition of organizations that realized that this was something that affected all their communities, and brought it forward to the City Council.

BEN NORTON: And then I know JVP has also been involved. Can you talk about the role of Jewish Voice for Peace in this campaign, to push for demilitarization of the peace, and social justice?

REBECCA VILKOMERSON: Yeah. So like I said, our local chapter in the Triangle region, JVP Triangle, was one of the anchoring groups of this coalition. So we were involved in that way. But also we’ve been looking at nationally, our biggest campaign right now is our Deadly Exchange campaign, and our aim is to end police exchanges between the U.S. and Israel. We’ve been putting, we launched the campaign about a year ago. This is the first victory of that campaign. We have other chapters throughout the United States that are looking at similar kinds of local campaigns.And our overarching goal, like you said, is the fact that the ADL, which is the premier provider of these exchanges, and other organizations that are providing these kinds of exchanges are basically trying to exchange a kind of worst practices. Israel, of course, under the guise of counter-terrorism is engaging in racial profiling, it’s engaging in extra-judicial assassinations, it’s engaging in collective punishment. And of course U.S. police forces don’t really need much training in racism. They’re training Israeli forces in broken windows policing.So what we really have is that these police exchanges are ways for Israel and the United States to learn from each other how to do the kinds of policing that really target in particular communities of color in both places. And what we want to do is propose an alternative which is really about safety and security for all people.

BEN NORTON: Yeah. And then can you talk about what exactly this training is? I mean, you mentioned some of the specific details, but as I mentioned, it’s not just local police. It’s also ICE officers, FBI agents. And of course, they’re not just working with Israeli police. Many of them are working with the Israel Defense Forces, the IDF, which, you know, in the past few weeks have been shooting an unarmed protesters in Gaza. Just a few days ago, on Friday, in fact, Israeli soldiers shot a young Palestinian teenager and killed him. Why are U.S. security forces, if you will, these, you know, officers from different agencies training with the Israeli military?

REBECCA VILKOMERSON: That’s exactly right. I mean, I think it’s important to say again what you just said, which is that we’re talking about police chiefs, we’re talking about ICE officers, which is the, you know, the group that’s responsible for detaining and deporting immigrants to the United States, Border Patrol officers and FBI officers. And these are generally high-ranking officers, and they’re coming back and bringing those tactics here more broadly.And I think, like you said, it’s also important to keep in mind I’m not sure that they train exactly with the IDF, but they do meet with border police, which are, in Israel which are known for some of the biggest human rights violations and violent tactics towards people in Israel, towards Palestinians and also towards refugees. So we really are talking about a systematic attempt to bring those worst practices back home. So you know, it’s something that I think and I hope that, especially in the last few weeks, that people, as people have seen unarmed protesters on the Gaza border, like you said, being attacked by a highly militarized, military force, to understand this is not the sort of tactics that we want to be bringing home where we already have enormous problems with the militarization and the ways that policing is being used on communities of color.

BEN NORTON: Yeah. And then finally, what actions and steps do you think people should take who are interested in mobilizing against police brutality, racist violence, racial profiling? You know, you mentioned the Deadly Exchange campaign JVP is involved in. What other activities can people do to help be a part of this campaign?

REBECCA VILKOMERSON: I think probably the most important people thing people can do is look to their local communities, find the organizations in your communities that are already doing the work against police brutality and police militarization and incarceration, and you know, build relationships with them or join them. That’s where all the most exciting work is happening, and that’s a role that we want Deadly Exchange to be lifting up and helping to support, by specifically focusing these exchanges. In every city and town there is wonderful work already being done. And also, folks can go talk to our DeadlyExchange.org website, where you can certainly get in touch with us, if you need help getting in touch with some of those local groups, or can sign our petition, and find other ways to get involved and to learn more about it.

BEN NORTON: Well, thanks so much for joining us, Rebecca. This is Rebecca Vilkomerson. She’s the executive director of Jewish Voice for Peace. And we were speaking about this historic measure in the Durham City Council that for the first time in the U.S. prohibits the exchange between police forces and the Israeli government. Thanks, Rebecca.

REBECCA VILKOMERSON: Thanks so much.