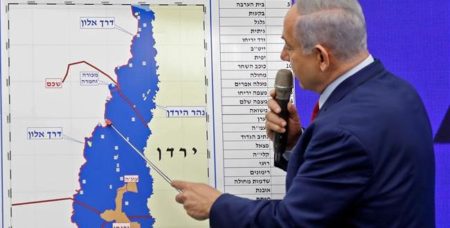 A coalition of American Jewish groups has sent a letter to leaders of Israel’s political parties, warning them against full or even partial annexation of the occupied West Bank.

The letter, written by the Progressive Israel Network, asks Israeli politicians to oppose the annexation plan being pursued by Prime Minister Benjamin Netanyahu, even if US President Donald Trump gives it a green light.

It states that Trump’s endorsement of West Bank annexation does not mean a sign of long-term American policy, Israeli newspaper Yedioth Ahronoth reported.

“Mistaking such a ‘green light’ from the president — for any type of consensus on the part of either US political party — would be a dangerous error for Israel,” the letter reads.

“Simply put, the approach of this president does not represent the long-term interests and likely future policy of the United States.”

The coalition said the annexation could harm relations between Israel and US Jews because the “vast majority of American Jews” support a solution to the Israeli-Palestinian conflict.

Jeremy Ben-Ami, the president of the advocacy group, said in a statement that “carrying out unilateral annexations in the West Bank would ultimately” lead Israel “down a disastrous path to permanent conflict.”

“It’s vital for Israeli leaders to recognize that whatever the dangerous and deluded policies of the Trump administration, the vast majority of Americans and American Jews are strongly opposed to annexation,” Ben-Ami said.

The letter has been signed by up to 13 groups, including ten members of the Progressive Israel Network – an umbrella coalition that includes J Street and the New Israel Fund.

PNN further reports that earlier, in mid-September, Netanyahu pledged to annex the Jordan Valley, which makes up 30 percent of the West Bank area, if he was re-elected.

In a highly provocative move, on March 25, the US president ignored a decades-long international consensus and signed a proclamation recognizing Israel’s “sovereignty” over the occupied Syrian Golan Heights.

Damascus strongly condemned the move and called it a “blatant attack on the sovereignty and territorial integrity” of Syria.

In 1967, Israel waged a full-scale war on Arab territories, during which it occupied a large swathe of Golan and annexed it in 1981, a move condemned by the international community. Syria has repeatedly reaffirmed its sovereignty over the Golan Heights, saying the territory must be completely restored to its control.

Trump’s favor for Israelis over Golan followed his recognition of Jerusalem al-Quds as the capital of Israel.

The US has relocated its embassy from Tel Aviv to Jerusalem al-Quds, which Palestinians consider the capital of their future state.