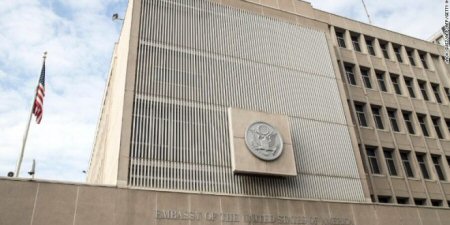 The US State Department’s security arm has been told to plan for potentially violent protests at US embassies and consulates, once the Trump administration announces it is moving the US embassy  to Jerusalem.

US President Donald Trump could announce, as early as Tuesday, that the US recognizes Jerusalem as Israel’s capital, said US officials with direct knowledge of the matter and foreign diplomats, according to CNN.
Upon making such decision public, Trump is expected to sign a waiver to keep the US embassy in Tel Aviv for another six months, but say his administration will move the diplomatic mission to Jerusalem at some point, which is a goal long sought by Israel.
The Diplomatic Security Service, which is charged with protecting US posts and personnel overseas, was already bracing for possible protests after Trump re-tweeted anti-Muslim videos on Wednesday. Officials feared a reprise of the violent protests at US embassies in the Middle East that erupted in September of 2012, following the publication of an anti-Muslim video on the internet. Embassies in that region were already on high security alert, PNN further reports.
A White House official confirmed alerts to those concerns by the State Department. “It didn’t manifest in anything actionable, but it was a big concern,” one State Department official said about the President’s re-tweets of the videos. “We saw in Cairo and other places that simply posting something on the internet, even if nothing was intended by it, could have real consequences.”
Although no incidents were reported this week, over the videos Trump re-tweeted, one senior official said the situation served as a useful exercise in planning for the Jerusalem embassy announcement.
“If there were protests, that would give us a good idea of where it was going to get hot and where we needed to take additional measures,” the official said.
The officials said planning was solely limited to how to react for possible protests after the announcement, and did not include any preparations for protecting any new or existing US facilities in Jerusalem. In the event the embassy does move to Jerusalem, the Diplomatic Security Service would be involved in securing the facility and its personnel.

PLO Secretary-General Dr. Saeb Erekat commented today, on news reports regarding possible US recognition of Jerusalem as the capital of Israel, saying that this  move will promote international anarchy and disrespect for global institutions and law.

Erekat said, in a statement:”Jerusalem is the social, political, cultural, religious and economic heart of Palestine adding that It is also the heart of billions of believers from the three monotheistic religions, including hundreds of millions of Arab Christians and Muslims. It is, therefore, the heart of the Arab World. It is a significant symbol of our region and its fate is key to any efforts leading to a peaceful and stable region”.

When, in 1988, the PLO took the painful and historic decision to recognize the 1967 borders as those of the State of Palestine, it did so understanding that this would be a step towards peace, he said.

At the same time, the PLO was affirmative that there would be no Palestinian state without East Jerusalem as its capital. This step was taken in accordance with international law and UN Security Council resolutions which clearly state that Jerusalem is not the capital of Israel, and that its illegal annexation of the city, as well as the measures taken to implement such an illegal move, are null and void.

If the US Administration decides to contradict its international commitments and historic foreign policy by recognizing Jerusalem as the capital of Israel, it is potentially not only going to promote international anarchy and disrespect for global institutions and law, but it will also be disqualifying itself to play any role in any initiative towards achieving a just and lasting peace.

If such a decision is announced, it may contribute to the further destabilization of the region, and will discourage many of those who still believe that a peaceful solution is achievable, to end over 50 years of Israeli occupation, 70 years of exile and decades of systematic violations of Palestinian national and human rights.

President Abbas has been in contact with several world leaders to assess the situation and to encourage them to take action, in order not to allow for those initiatives to materialize into a new political reality. The Palestinian leadership is going to meet soon, in order to approve necessary steps in case such an announcement is made.