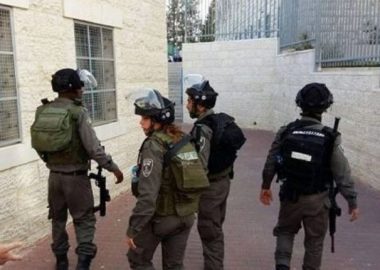 The soldiers also detained the head of Tiwani Local Council, in addition to two council members, and workers, east of Yatta town, south of the southern West Bank city of Hebron.

Ahmad Salah, the coordinator of the Popular Committee against the Wall and Colonies in al-Khader, said the soldiers invaded two schools, one for girls and one for boys, causing anxiety attacks among several students.

He added that the soldiers later withdrew from the two schools, and harassed several children heading back home, leading to clashes.

The army fired many gas bombs and concussion grenades; no injuries were reported.

Salah also stated that the soldiers chased many schoolchildren in the al-Baloa’ area, in the center of the town, and briefly detained them.

On Sunday evening, the soldiers briefly detained Mohammad Ribhi Rib’ie, the head of Tiwani Village council, east of Yatta, south of the southern West Bank city of Hebron, in addition to council members Mahmoud al-Hamamra and Ismael al-‘Amour, and several workers who were conducting maintenance work to rehabilitate a road linking Tiwani with nearby communities.