US Vetoes Resolution Calling For Providing Protection To The Palestinian People 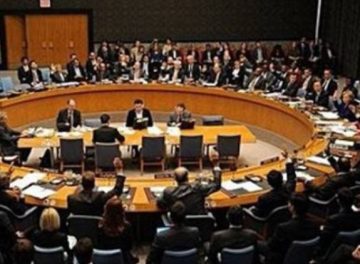 The United States has used its veto power, Friday, against a draft resolution at the United Nations, calling for providing protection to the Palestinian People, living under illegal Israeli occupation. The Veto came after the resolution was backed by 10 counties at the UN Security Council.

The resolution was sponsored by Kuwait; it requires nine votes to be adopted by the 15-member council, and was voted for by ten countries, including Russia, China and France.

Four counties, including Britain, abstained while the United States, the only country that opposed it, used its Veto power to topple the resolution.

The draft resolution denounced the Israeli military escalation against the Palestinian people, and the use of “excessive, disproportionate and indiscriminate force” by the army, and also criticized the “firing of shells from Gaza into civilian areas in Israel.”

Nikki Haley, the United States Envoy to the United Nations, said Washington rejects the resolution because it represents “support of Hamas,” while the Kuwaiti Envoy Mansour al-Qtaibi, said rejecting the resolution reveals that Israel is a state that considers itself above International Law, with direct U.S. support.

It is worth mentioning that the UN Security Council also rejected a draft resolution presented by the United States “condemning Hamas,” and holding its responsible for the escalation in Gaza; the United states was the only country that voted for its own draft.

The Permanent Palestinian Representative at the United Nations, Ambassador Riyad Mansour, said the Palestinians reject the US amendment to the Kuwaiti draft, because was hostile to the Palestinian people, and only aims at protecting Israel. Meanwhile in Gaza, Israeli soldiers killed, Friday, a young Palestinian woman, identified as Razan Ashraf Najjar, 22, who worked as a volunteer medic with the Palestinian Medical Relief Society, and injured 100 Palestinians, including 40 with live fire.

Her death brings the number of Palestinians, killed by Israeli army fire in the Gaza Strip since March 30th, to 119, including 13 children, while more than 13400 have been injured, including 330 who suffered life-threatening wounds.