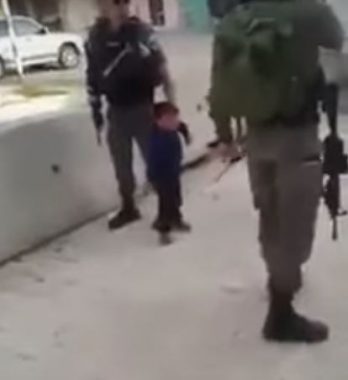 A video published by nonviolent activist, Raed Jihad Abu Rmeila, exposed Israeli soldiers assaulting a Palestinian child, only three years of age, and attempting to abduct him, in Hebron, in the southern part of the West Bank.

The video shows the soldiers holding the terrified child, Durgham Karam Maswada, 3, who was crying sobbing, in front of his home near the Ibrahimi Mosque, in the Old City of Hebron.

It also shows the child’s older brother succeeding in freeing him from the hands of the soldiers, who were holding him despite his cries.