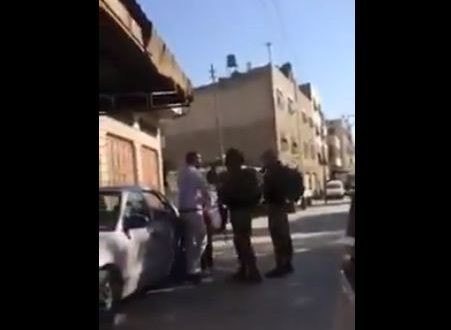 An online video has surfaced, showing two Israeli soldiers shoving and cocking a gun in the face of a Palestinian father, in the presence of his young son, causing outrage among Palestinian social media users.

The scuffle — which took place in the southern West Bank city of Hebron, on Tuesday — starts with an Israeli soldier shouting at the man, saying that the child has been throwing rocks at the regime’s forces.

Another Israeli soldier then joined in and both started shoving the Palestinian man. The man responded by saying “don’t raise your hands on me.”

One of the Israeli soldiers cocked and aimed his gun at the father’s face as he tried to move on with his child.

The incident, nonetheless, gained widespread attention, prompting Israeli authorities to claim that they were probing the incident.

This is not the first time that Israeli soldiers have been caught on camera assaulting Palestinians, PNN further reports.

Just last week, footage emerged showing an Israeli police officer firing at an unarmed young Palestinian man as he was leaving the scene with his arms raised.

Israeli police claimed the incident had taken place roughly a year and a half ago, and that the officer had been arrested on suspicion of shooting the Palestinian man with a sponge-tipped bullet “as a dubious form of entertainment.”

Crimes perpetrated by Israeli forces against Palestinians are rarely acknowledged by their authorities. Limited cases against Israeli forces are addressed in courts and are also known to result in very mild prison sentences.

In a notable case in 2017, the United Nations slammed a “lenient” 18-month prison sentence handed to Israeli Sergeant Elor Azaria who had killed a wounded Palestinian. The UN described the murder as an apparent “extrajudicial execution.”

Several human rights organizations have highlighted that the Israeli military purposely targets Palestinians with unnecessary lethal force, with one report saying that senior Israeli officials have encouraged forces “to unlawfully shoot to kill.”