Soldiers Force A Palestinian Out Of His Orchard, South Of Nablus 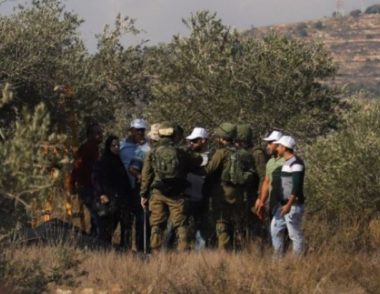 Israeli soldiers invaded, Saturday, a Palestinian olive orchard near Huwwara military roadblock, south of the northern West Bank city of Nablus, and forced a farmer out of his land.

Local sources said many soldiers invaded an olive orchard, before attacking the owner while he was picking his trees, and forced him out.

They added that the Palestinian has a permit from the military to enter his olive orchard, isolated by the illegal Annexation Wall and colonies, however, the soldiers forced him out.

The attack is one of the dozens of violations targeting the Palestinian and their lands by both the soldiers and illegal colonialist settlers.